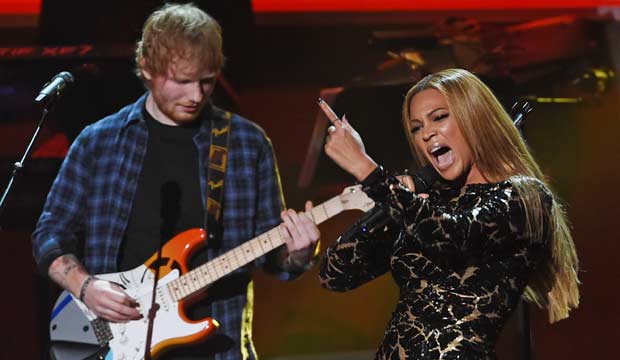 Ed Sheeran won Grammys for Best Pop Album (“Divide”) and Best Pop Solo Performance (“Shape of You”) last year, but was completely snubbed in the general field. And Beyonce has been collecting Grammy IOUs in the top categories for years after surprise Album of the Year losses for “Beyonce” (2015) and “Lemonade” (2017). So the recording academy could kill two birds with one gramophone by awarding their “Perfect” duet, which could be perfect for Grammy voters. Our forum posters are discussing the possibility here.

On paper, “Perfect” seems almost custom-built for Grammys. It’s a romantic ballad like past Record of the Year champs “Need You Now” by Lady Antebellum (2011), “Stay with Me” by Sam Smith (2015) and “Hello” by Adele (2017). It topped the charts for five weeks (six if you count Sheeran’s solo version), and the Grammys can’t resist a big hit. And it’s the kind of musically conservative, adult-contemporary song voters often get flak for voting for again and again, but music fans might not mind if it means making it up to Beyonce.

What do our forum posters think of the song’s chances? Read some of their comments below, and join the discussion here in our forums.

circa 1993: “That has Grammy bait written all over it. It’s a safe, predictable contender.”

DC95: “I don’t think they’ll nominate it [for Record of the Year]. If it were the original version, they would.”

Robinladen: “I honestly see it as the front-runner now [for Record of the Year]. It’s a well known version, not some obscure remix or live version. By two beloved artists with a robbed narrative. And it’s a nice and safe song.”