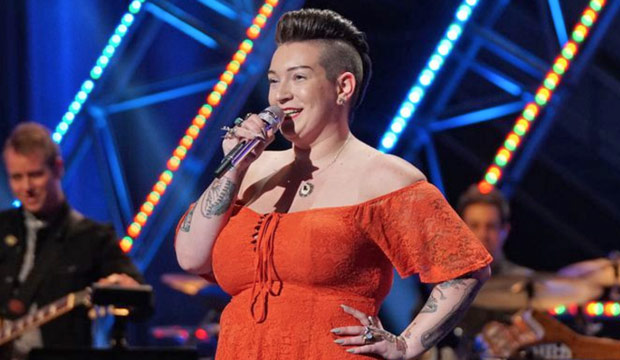 “Ok I’m just gonna flat out say it … Effie was absolutely robbed!” declared outraged “American Idol” fan Jen W following the elimination of powerhouse singer Effie Passero. “This is supposed to be about SINGERS! Effie has a phenomenal voice,” she continued. Jen W is not the only Gold Derby reader who believes that Effie was robbed of a slot in the Top 14 on “American Idol” Season 16. See more colorful responses below and then be sure to give us your thoughts down in the comments section.

SEE Who will win ‘American Idol’ in its first season on ABC? [POLL]

Effie was eliminated this week after performing “Barracuda” solo and “Diane” with special guest Cam. “American Idol” judges Katy Perry, Luke Bryan and Lionel Richie cut five singers on Monday — Effie, Ron Bultongez, Amelia Hammer Harris, Shannon O’Hara and Alyssa Raghu — in preparation for next week’s live shows. Effie, who grew up studying opera, auditioned in Los Angeles with an original song, showcasing her singer-songwriting abilities. Later in the showcase rounds she performed “The Dance” as a tribute to her mother.

Here’s a sampling of comments from fans who are outraged that Effie Passero failed to make the live shows. Do YOU agree or disagree with these passionate readers?

Sue Suthard: “I agree Effie was the best singer on the show. It’s a fix. Good luck Effie. I’ll buy your record and come see your show.”

Laurie F: “Effie was robbed! Some of the guys in the first group and the second group can’t hold a candle, let alone a note, to her. Please bring Effie back!”

Linda Stark: “The duo she did with Cam was just out of this world. I have been watch from the first day of your reboot of Idol. You lost me now. Far too many that were really not that good you let slide in. Effie was a sure thing.”

ElBee: “Effie WAS robbed. And after they made her sing country — they didn’t exactly set her up for success and she still killed it.”

Trina: “I think a big mistake was made letting Effie go. She nailed Barracuda. She has great stage presence and damn she can sing. I hope the viewers vote to bring her back. She’s awesome!”

Ame: “This is my first time watching the show, and I’m just so disappointed. She was one of the absolute best there; she is interesting, captivating, nearly flawless, and so versatile, with a delightfully pleasing sound across different styles.”