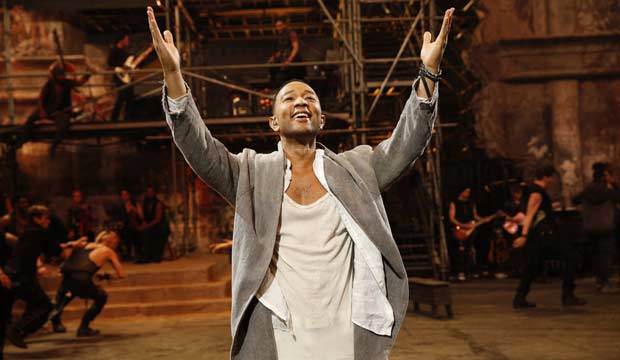 John Legend has won an Oscar, a Tony and multiple Grammys. That means he only needs an Emmy to complete his EGOT. And he’s certainly swinging for the fences in that regard. On Easter Sunday, April 1, he played the title character in NBC’s live theatrical staging of Andrew Lloyd Webber‘s rock opera “Jesus Christ Superstar,” which he also executive produced. Will he wrap up his grand slam of show business awards in the grandest of all possible roles?

Legend’s primary claim to fame is as a recording artist. His breakthrough came with his 2004 debut album “Get Lifted,” which went double-platinum and won him three Grammys, including Best New Artist. To date he has won 10 Grammys out of 28 nominations, most recently Best Visual Media Song in 2016 for “Glory,” which he co-wrote with Common for the film “Selma.”

“Glory” is also what won Legend his Oscar. He claimed Best Original Song for the anthem from the acclaimed civil rights docudrama. Musicians tend to have the easiest road to EGOT since there are music categories at all four events, so it’s no surprise his songs got him halfway there. But perhaps surprisingly, that’s not how he got his Tony.

Instead of composing or performing in a musical on the Great White Way, Legend actually won his Tony Award in 2017 for producing. He was one of the men behind August Wilson‘s “Jitney,” and for that he won Best Play Revival.

So how about that Emmy? “Jesus Christ Superstar” puts him even closer to that than you might think. Sure, he could win Best Movie/Mini Actor for his performance, which Maureen Ryan (Variety) said “had the range to bring soulful pain and sweet clarity to his biggest musical moments.” But his big ticket to EGOT might be for producing the show. He’ll win an Emmy if “Jesus Christ Superstar” takes Best Variety Special (Live), and history indicates there’s a good chance of that.

The TV academy announced that Best Variety Special (Live) and Best Variety Special (Pre-Recorded) would replace the Best Special Class Program category. That Special Class race went to “Sweeney Todd (Live from Lincoln Center)” in 2015 and “Grease Live” in 2016, and other musical productions on TV have earned nominations in recent years: “Carousel (Live from Lincoln Center)” (2013), “The Sound of Music Live” (2014) and “Hairspray Live” (2017). When a musical didn’t win, it was usually the Tony Awards telecast that prevailed (as it did in 2017), but this year Emmy voters will be considering last summer’s Tonys hosted by Kevin Spacey, who was subsequently accused of sexual assault and harassment during the #MeToo movement. That might be enough to keep TV academy members from voting for it. So much the way Christopher Plummer saved “All the Money in the World” by replacing Spacey in the role of J. Paul Getty, so too could Legend save the Special Class Program race by giving voters a viable alternative.

And Legend wouldn’t be the only EGOT winner if “Jesus Christ Superstar” prevails: Andrew Lloyd Webber and Tim Rice were also producers of the broadcast, and they also need just an Emmy to complete their grand slam. So they would be the 13th, 14th and 15th to achieve EGOT status. Legend would be the second-youngest to do so at age 39 (he’d be a few months older than Robert Lopez was when he finished his grand slam), and the second-fastest at just over 12 years between his first Grammys at the 2006 telecast and the Emmys in 2018 (Lopez completed EGOT in just 10 years). So will the power of “Christ” compel the TV academy to give them this historic prize?