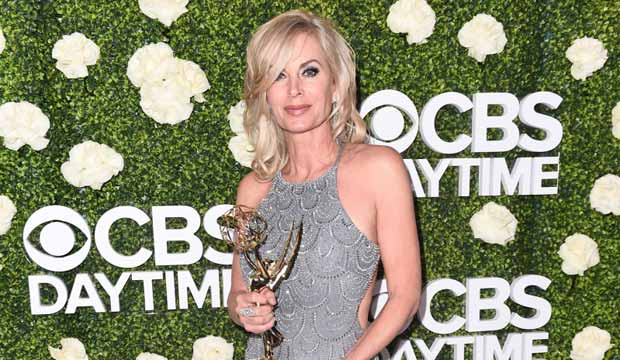 Soap opera veteran Eileen Davidson is on her way out at “The Young and the Restless,” where she has played businesswoman Ashley Abbott on and off for 36 years. She confirmed her exit on Twitter on June 27 (scroll down to see her message). Will you be sad to see her go? Vote in our poll at the bottom of this post to let us know what you think of her upcoming departure.

“I’ve been so blessed to be able to play Ashley Abbott and work with the amazing people on the show and have nothing but gratitude and love for all!” Davidson tweeted. This isn’t the first time she has exited the top-rated CBS soap opera. After she originated the role in 1982 she spent six years on the show until leaving in 1988. In the intervening years Ashley was played by Brenda Epperson (1988-1995) and then Shari Shattuck (1996-1999) before Davidson’s return in 1999.

The role earned Davidson two Daytime Emmy nominations for Best Actress, in 2003 and just a few months ago in 2018. This year she won, which was her first victory for this role but not her first Emmy overall. In-between stints on “Y&R” she also played multiple roles on “Days of Our Lives,” which earned her a Best Actress nom in 1998 and a win in 2014.

Yes I am leaving my second home @YandR_CBS in September. I’ve been so blessed to be able to play Ashley Abbott and work with the amazing people on the show and have nothing but gratitude and love for all!!! Time for a little more control over my day to day! ❤❤????