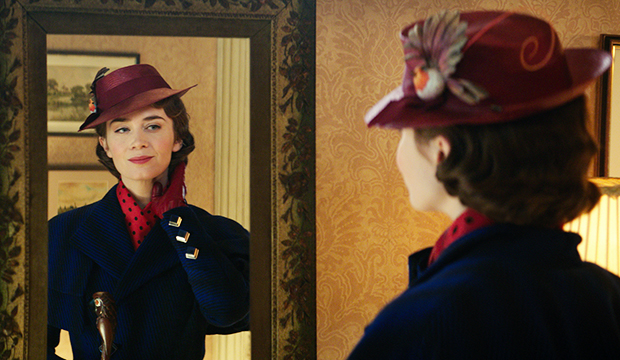 Mary Poppins is returning to theaters next month, but will she also return to the Best Actress Oscar race? It’s starting to look like that. Emily Blunt has climbed up three spots in our combined odds, from 10th place to seventh, since “Mary Poppins Returns” started screening last week for the industry and press.

While official reviews for the film are still under embargo, the sequel and Blunt herself have earned high praise on social media. We can confirm that Blunt is practically perfect in every way as Mary Poppins and more than met the challenge of filling the shoes of Julie Andrews, who won Best Actress for the original 1964 film. Two Experts, Edward Douglas (Weekend Warrior) and Andrea Mandell (USA Today), have added Blunt to their Best Actress predictions in the past week. As the film continues to screen over the next few weeks, don’t be surprised if Blunt picks up more spots on pundits’ lists.

This would be the first nomination for Blunt, who’s also contending in supporting for “A Quiet Place.” The hardest part for Blunt would be cracking the top five, as this is one of the most competitive Best Actress race in recent years. The three frontrunners, Lady Gaga (“A Star Is Born”), Glenn Close (“The Wife”) and Olivia Colman (“The Favourite”), appear to be locks, with the last two spots more open. Melissa McCarthy (“Can You Ever Forgive Me?”) and Yalitza Aparicio (“Roma”) round out our predicted top five, with Viola Davis (“Widows”) in sixth.

Blunt could burnish her chances with a victory for Best Film Comedy/Musical Actress at the Golden Globes. She’s currently in second place behind Colman, but has closed the gap in the past week. Andrews won the Globe en route to the Oscar.