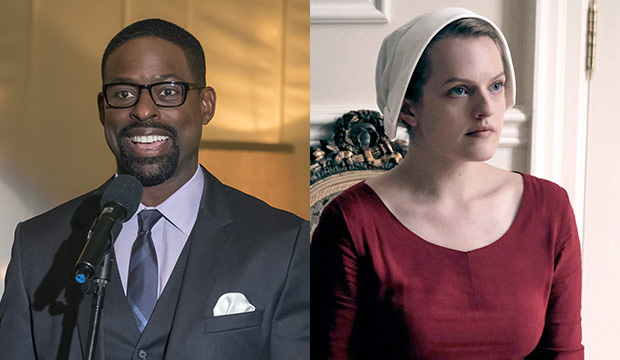 Not much has changed in our odds since Emmy nominations were announced three weeks ago. Almost everyone who was predicted to win pre-nominations is still in first place, but we surely will get at least one surprise in September. No one saw Ann Dowd (“The Handmaid’s Tale”) coming last year or Ben Mendelsohn (“Bloodline”) the year before. So which regular acting category has the most upset potential this year?

Best Drama Actor
Reigning champ Sterling K. Brown (“This Is Us”) seemed invincible after sweeping the Golden Globe, Critics’ Choice and SAG Award on the heels of his Emmy victory. But “This Is Us” had a disappointing nomination showing and he again has to deal with his co-star Milo Ventimiglia, who had the buzziest episode of the season with Jack’s death. They, like “Westworld”‘s Jeffrey Wright and Ed Harris, could split votes, which is why Matthew Rhys has found himself in second place for the final season of “The Americans.” Jason Bateman is the only other nominee besides Rhys not competing against a co-star, and he also has a second surprise nomination for directing “Ozark.”

Best Drama Actress
This field is loaded. The obvious choice is for Elisabeth Moss to win her second in a row for “The Handmaid’s Tale.” But there are three people contending for their final seasons — Claire Foy (“The Crown”), Tatiana Maslany (“Orphan Black”) and Keri Russell (“The Americans” — two of whom, Foy and Russell, have never won before and put in career-best work on their respective final seasons. Then there’s Sandra Oh (“Killing Eve”), who made history as the category’s first Asian nominee and also has the overdue factor, having lost five times in supporting for “Grey’s Anatomy”; she’s currently in second place. And Evan Rachel Wood (“Westworld”) hails from the second most-nominated show.

Best Drama Supporting Actor
This is one of two categories without the defending champ, John Lithgow, who was one-and-done on “The Crown.” Lithgow was such a force last year that it’s hard to even say who was runner-up. There was also no breakout this season who has asserted himself. David Harbour (“Stranger Things”) won Critics’ Choice and bagged Golden Globe and SAG nominations, but he feels like a soft frontrunner. Two-time champ Peter Dinklage (“Game of Thrones”) is in second, but he’s up against a co-star, Nikolaj Coster-Waldau, for the second time. The last time that happened, Ben Mendelsohn pulled off a shocker. Joseph Fiennes (“The Handmaid’s Tale) has the benefit of being on the reigning Best Drama Series winner, while Matt Smith is also in the running for his last season of “The Crown.” And then there’s Mandy Patinkin (“Homeland”), who continues to be the flagbearer for “Homeland.” In a divided, weak field, a respected veteran — and former Emmy champ — like him could take it home.

Best Drama Supporting Actress
Ann Dowd only faced off against one “Handmaid’s” co-star last year, Samira Wiley, who is in guest this year, but she’s up against two this time, Alexis Bledel and Yvonne Strahovski, who was the MVP of Season 2. The last time there were three nominees from one show in this category — in 2016 with “Game of Thrones”‘ Lena Headey, who’s nominated this year, Emilia Clarke and Maisie Williams — Maggie Smith (“Downton Abbey”) won, much to Jimmy Kimmel‘s chagrin. Vanessa Kirby (“The Crown”) took Princess Margaret to new heights in her final season, while two of last year’s predicted winners, Thandie Newton (“Westworld”) and Millie Bobby Brown (“Stranger Things”), will be sitting out next year’s Emmy cycle due their shows’ delayed premieres.

Best Comedy Actor
Donald Glover (“Atlanta”) still has a comfortable lead to repeat, but Bill Hader (“Barry”), against whom Glover is competing in five categories, is slowly rising. “Barry” overperformed with 13 nominations, just three shy of “Atlanta”‘s haul. Ted Danson‘s nomination for “The Good Place” was a pleasant, welcome surprise, and you can never count out a legend. Larry David (“Curb Your Enthusiasm”) is also back, but the Emmys have never liked awarding people who play fictionalized versions of themselves. Anthony Anderson (“Black-ish”) might be hampered by an assault investigation against him, while reigning SAG champ William H. Macy (“Shameless”) probably should just be happy to be nominated.

Best Comedy Actress
Six-time defending champ Julia Louis-Dreyfus (“Veep”) is out, but Rachel Brosnahan (“The Marvelous Mrs. Maisel”) has been the runaway favorite all year — she has the best odds out of all the No. 1 picks. Tracee Ellis Ross (“Black-ish”), Allison Janney (“Mom”), Lily Tomlin (“Grace and Frankie”) and Pamela Adlon (“Better Things”) have all lost to JLD, if voters want to reward a bridesmaid. Like Brosnahan, Issa Rae (“Insecure”) is a newbie in the category, but her show did not make a splash anywhere else.

Best Comedy Supporting Actor
“Will & Grace”‘ Sean Hayes was the predicted winner pre-nominations, but he wasn’t even nominated. Oops. In his absence, Henry Winkler (“Barry”), who has never won an Emmy, has locked into the top sot, while reigning champ Alec Baldwin (“Saturday Night Live”) is down in fifth. Has the novelty of Baldwin-as-Trump worn off yet? This will be the true test. Three-time champ Tony Shalhoub (“The Marvelous Mrs. Maisel”), fresh off a Tony win, is in second place, followed by Brian Tyree Henry (“Atltanta”), who missed here last year but got a guest nomination for “This Is Us.” 2015 winner Louie Anderson is hoping to relcaim his crown, while Tituss Burgess (“Unbreakable Kimmy Schmidt”) is overdue for a win. Kenan Thompson (“SNL”) is the surprise of the group, but he could certainly play up the “longest-running cast member” narrative.

Best Comedy Supporting Actress
Kate McKinnon (“SNL”) is looking to three-peat. She beat two co-stars last year and is vying against Leslie Jones and Aidy Bryant now, but her victory isn’t as undeniable as it was last year for the show’s resurgent 42nd season. Currently in second, Alex Borstein is a classic scene-stealer on “Mrs. Maisel,” is a past winner for “Family Guy” and has voiceover nomination for the Fox comedy as well. Two former champs, Laurie Metcalf (“Roseanne”) and Megan Mullally (“Will & Grace”), could ride good will and nostalgia, especially Metcalf after her big year that included an Oscar nomination, a Tony win and dealing with the “Roseanne” cancellation fallout. Betty Gilpin (“GLOW”) and Zazie Beetz (“Atlanta”) are first-time nominees.