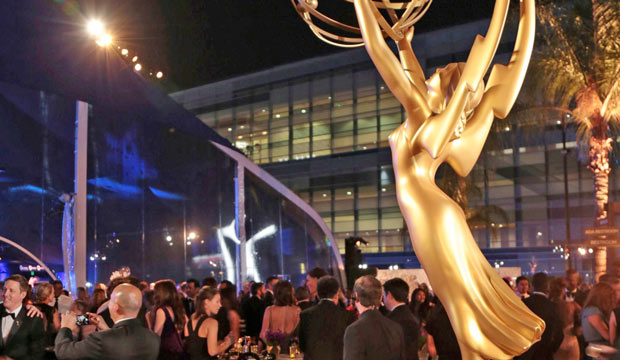 Emmy turned 70 this year, but her wrinkles still aren’t showing thanks to the tireless efforts of the production crew that helped put on the 2018 Emmy Awards. (See the complete winners list here.) After watching the ceremony on television all my life, I actually — gasp! — got to attend the telecast this year and witnessed “The Marvelous Mrs. Maisel” and “Game of Thrones” take home the major series prizes. While seated in the Loge section of the Microsoft Theatre (directly behind all the celebs and underneath the nosebleeds), I uncovered these seven secrets about the Emmy Awards that you wouldn’t know unless you were actually there.

Bring your wallet
You may think that the 7,000 or so attendees of the Emmy Awards would be treated with free snacks and drinks, but that’s not the case at all. In fact, a hot dog and soda cost me a whopping $13. For nervous folks who wanted to take the edge off, be warned that premium cocktails and beer ranged anywhere from $11 to $14. And trust me, plenty of people were drinking — the entire Loge section smelled like day-old red wine.

No warm-up person
I’ve been to many live shows before, but I was surprised to see that Emmy is one of the few who doesn’t hire a warm-up person. Sitcoms, game shows, talk shows — you name it, there’s usually a person whose sole job is to warm up the crowd and get them excited for the main event. The two Creative Arts Emmy ceremonies the weekend prior even had someone on hand to help boost the audience’s participation. But not the Primetime Emmys, it turns out.

Commercial mayhem
Every commercial break felt like an Emmys family reunion, as nominees and attendees roamed the aisles and met up with fellow celebs. Others ran for the bathroom during the few minutes the show wasn’t broadcasting live, which often came at a price. If you didn’t finish your business by the time the show came back from break, you’d be locked outside of the theater until the next commercial. In other words, hold it next time!

Standing O-xcitement
Obviously the longest, and most respectful, standing ovation was for TV legend Betty White, who recently celebrated her 96th birthday. But the only person that I noticed received a standing O both before AND after their acceptance speech was “Barry” scene-stealer Henry Winkler. After four decades working in the television industry, it was so nice of Winkler’s fellow peers to give him the respect that he deserved. (Follow @GoldDerby on Instagram to see our photo with Winkler and his shiny Emmy.)

Where are the hosts?
Emmy hosts Colin Jost and Michael Che may have made television viewers laugh at home, but they were nowhere to be seen in between acts. As a longtime Emmy fan, I always just assumed that the host(s) would joke or chat with the crowd while they were waiting for the live broadcast to resume, but that simply wasn’t the case, at least not this year. When Jost and Che weren’t on camera, they were totally out of sight, out of mind.

SEETom O’Neil: ‘Game of Thrones’ reclaimed its crown in a dramatic coup at the Emmys

Happy Birthday!
To celebrate Emmy’s 70th birthday, a whole hoard of celebs were tasked with singing the “Happy Birthday” song — everyone from “The Assassination of Gianni Versace” winner Darren Criss to “Outlander” heartthrobs Caitriona Balfe and Sam Heughan. This cute clip package was shown to the crowd during a commercial break, but wasn’t (to my knowledge) broadcast nationwide. Good news: you can watch the clip right here.

In Memoriam clap-fest
I’ve heard rumors that at other awards shows the producers will warn the theater crowd in advance not to clap during the In Memoriam tribute. The thinking is that they don’t want some deceased celebs to earn more applause than others, which could ruin the touching moment. But there was no such suggestion this time around. People everywhere were clapping (and not clapping) where they saw fit. Could you hear the applause during the TV broadcast? Let me know down in the comments section.