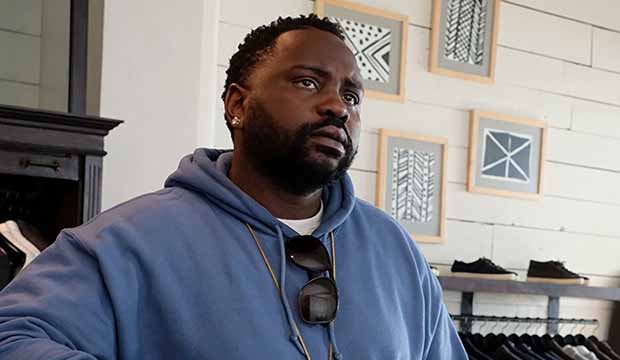 2018 has been quite a year for Brian Tyree Henry. The actor earned his first Tony Award nomination this spring for his featured performance as a security guard in the play “Lobby Hero.” And now Henry has received an Emmy nomination for Best Comedy Supporting Actor for his work as rapper Alfred “Paper Boi” Miles in the FX comedy series “Atlanta.” This is his first nomination for this role, but it’s actually his second overall. Last year he picked up a Best Drama Guest Actor nom for appearing in an episode of “This is Us.”

Henry chose “Woods” as his episode submission to Emmy judges. He’s front and center from start to finish as Alfred decides to spend his day with his friend Ciara (Angela Wildflower). Sierra is very aware of her social media “brand” and encourages Alfred to step up his own self-promotional game by making more savvy use of Instagram. But Alfred insists on his own authenticity, and after they argue he ditches her at a nail salon, which means he has to walk home alone.

Matters take a dark turn when Alfred is approached by three “fans” who proceed to mug him, and he must run into the nearby woods to dodge their bullets, but he gets lost along the way. As the sun begins to go down Alfred encounters a strange old man (Reggie Green) who he hopes will direct him back to the road. But instead the man becomes dangerous, holding a box cutter to Alfred’s throat. Eventually he finds his way to safety at a gas station, where he is met by another fan. And he decides to stop being so stubborn and agrees to a selfie.

Will Henry win his first Emmy for this performance? Let’s look at the pros and cons.

This was one of the standout performances of the season. You want to look away as awful things are happening to a character you like, but Henry makes sure that you can’t.

Henry is the lead actor of this episode, which lets him play out a complete emotional arc, from Alfred’s stubbornness during his more comic scenes with Ciara, to his despair as he fears for his life in the woods and struggles with depression and grief.

The episode is dedicated to Henry’s own mother, who died in 2016. The fact that this episode hit so close to home for the actor could especially move voters.

Henry’s star is on the rise. In addition to his Tony and Emmy noms this year he’s featured in potential Oscar contenders this fall, including Steve McQueen‘s “Widows” and Barry Jenkins‘s “If Beale Street Could Talk.” Emmy voters might want to be the first to honor him.

SEEWill ‘Atlanta’ be first show in 19 years to win Best Comedy Series Emmy for Season 2 after losing for Season 1?

This is one of the more dramatic “Atlanta” episodes, so the laughs are few. In a category where Emmy voters in the past have favored the funniest performances by scene-stealers like Sean Hayes (“Will and Grace”) and Ty Burrell (“Modern Family”), this might not be what voters are looking for.

There’s also a surprising amount of violence in the episode which may also put off some comedy voters.