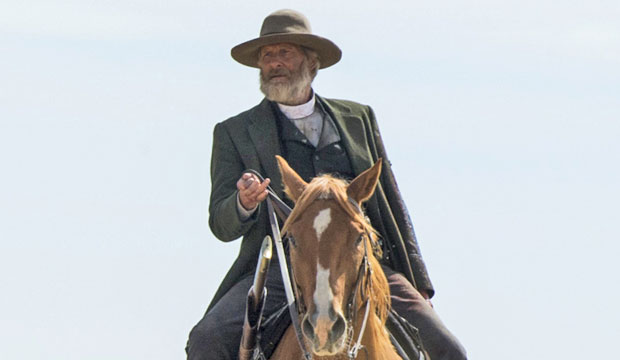 It’s a good year for Jeff Daniels at the Emmys. The veteran actor picked up two bids this year, one for Best Movie/Mini Actor for “The Looming Tower” and another for Best Movie/Mini Supporting Actor for “Godless.” In the latter, Daniels plays against type as a ruthless killer in the Old West. This is the first time he’s been in the Emmy race since his three consecutive Best Drama Actor nominations for “The Newsroom” (2013-2015), the first of which brought him a victory.

Daniels submitted for Emmy consideration the first episode of “Godless,” titled “An Incident at Creede.” In it, Roy Goode (Jack O’Connell) flees a violent outlaw gang led by his surrogate father, Frank Griffin (Daniels), who lost an arm from a gunshot wound delivered by the runaway. Roy ends up in the town of La Belle, which is inhabited almost entirely by women after a mining accident wiped out most of the men. Hot on his trail, Frank lets everyone he meets know that if they’re hiding Roy Goode, their days are numbered.

Can Daniels win for this episode? Let’s dive into the pros and cons:

Frank Griffin is your classic winking devil, a violent killer with a silver tongue and flashes of empathy. Daniels has a lot of fun subverting his everyman image with this one-armed baddie, a stark contrast to the heroic John O’Neill in “The Looming Tower.” Voters may be impressed by his range.

With 12 nominations, “Godless” is clearly popular with Emmy voters. A victory for Daniels could be either a good way to reward the series if voters are leaning towards another program in other categories, or it could be part of a sweep if “Godless” ends up having that kind of night.

The three contenders from Best Limited Series front-runner “The Assassination of Gianni Versace” — Ricky Martin, Edgar Ramirez and Finn Wittrock — could split the vote, which might benefit Daniels as the lone “Godless” nominee in this category.

Though his nomination for “The Looming Tower” may help him, having multiple bids in the same year doesn’t always mean you’re destined to win one. Just ask Laurie Metcalf, who went home empty handed in 2016 despite three nominations. Daniels could theoretically pull votes away from himself if academy members want to spread the wealth but don’t agree on which category to reward him in.

“Godless” is often described as a “feminist western,” given its strong roles for several women, including Emmy nominees Michelle Dockery (lead) and Merritt Wever (supporting). Given its reputation, voters might want to support one of them for the series before they cast a vote for Daniels.