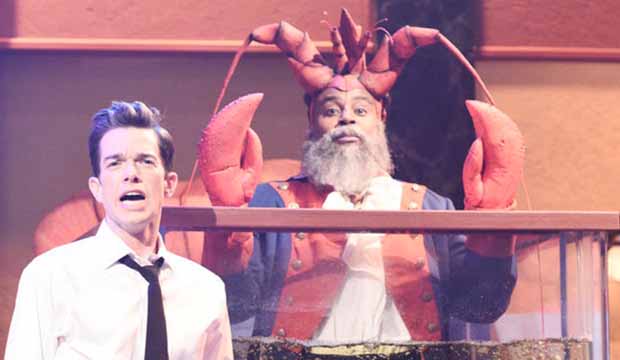 Kenan Thompson is finally getting his due for “Saturday Night Live,” earning his first Emmy nomination for acting after a record-breaking 15 years on the show. Thompson actually earned his first nomination last year for co-writing the “SNL” song “Last Christmas” in the Best Music and Lyrics category, but this time around he’s making his Emmy debut in the Comedy Supporting Actor category, where he is nominated alongside recurring guest star (and defending champion) Alec Baldwin.

Thompson has submitted the John Mulaney-hosted episode of “SNL” for consideration. It features the actor memorably portraying a lobster about to be boiled who sings a version of “Who Am I?” from “Les Miserables.” He also plays an incredulous teacher, a man obsessed with sex in a “Wild Wild Country” parody, and LaVar Ball during Weekend Update.

Will Thompson be able to take the goodwill from his first Emmy acting nomination and turn it into a win? Let’s examine the pros and cons.

Thompson’s name is written in the “SNL” history books as the institution’s longest-running cast member. Over the course of 15 seasons he has worked with hundreds of people in show business including fellow cast members who have become major stars, like Tina Fey, Amy Poehler, Jimmy Fallon, Seth Meyers, Bill Hader, Kristen Wiig and Kate McKinnon. We also know how much Emmy voters love “SNL” these days based on its nine acting nominations this year and four acting wins in 2017. So Thompson has a clear advantage as the elder statesman from a beloved show.

Thompson is featured in four sketches in his submission, and he’s a focal point in three of them. In the “Wild Wild Country” sketch he excels in frankly speaking about how he is only in the cult for the sex. And his recurring impression of Ball is humorously boastful and clueless as always. But it is the lobster sketch that truly exemplifies Thompson’s willingness to be totally silly for a laugh, with his simply sung “Who Am I?” eliciting the biggest laugh of the entire sketch.

One roadblock for Thompson in the Comedy Supporting Actor category is Baldwin being nominated for “SNL” as well. Baldwin won last year for his highly buzzed-about performance as Donald Trump, and academy members who are fans of “SNL” could lean more towards him when voting in this category. Or they could split the “SNL” vote, costing them both a win.

The fact that it took this long for Emmy voters to finally nominate Thompson may suggest that voters aren’t as passionate about his contributions to “SNL,” so perhaps this overdue nomination is his reward.