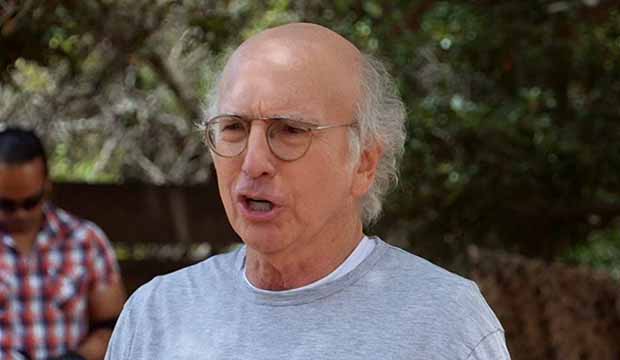 Larry David took a six-year hiatus from playing himself on his HBO comedy series “Curb Your Enthusiasm,” but this year Emmy voters seemed “pretty, pretty, pretty” enthused about his return. In addition to David’s sixth nomination for Best Comedy Actor, the long-running comedy earned three other bids this year, including Best Comedy Series. David, who previously won two Emmys for writing and producing “Seinfeld” in 1993, has submitted the ninth season finale, “Fatwa!,” for Emmy voters’ consideration.

In the episode, Larry prepares for the first performances of his new stage musical, “Fatwa!,” a comedy loosely based on the real-life fatwa issued against award-winning author Salman Rushdie. As the curtain nears, Larry agrees to house two of star Lin-Manuel Miranda’s unruly and unappreciative cousins, prepares to give a toast at the wedding of his friend and manager Jeff’s (Jeff Garlin) daughter, and plans a paintball excursion for the “Fatwa!” cast and crew. In traditional “Curb” fashion, though, Larry manages to irritate and alienate his friends and coworkers before the 51-minute episode ends.

Could Larry David finally win his first acting Emmy for “Curb Your Enthusiasm” after five previous losses? Let’s explore the pros and cons.

David submitted a hysterical episode to Emmy voters, and he appears in nearly every scene of this super-sized season finale. “Fatwa!” features everything fans of David’s humor expect from an episode of “Curb,” from his minor social quibbles about restaurant seating policies to his rules about offering thanks and apologies. David rises to the occasion as an actor, particularly in a series of consecutive confrontations with Miranda, F. Murray Abraham, and the musical’s stage manager (Nick Offerman) on a paintball field that culminates in an Alexander Hamilton/Aaron Burr-esque duel.

Although David’s not the only industry veteran in the Comedy Actor category, voters may see him as the most overdue of the line-up. Over the course of his career in television David has earned 27 Emmy nominations, including seven as an actor for both “Curb Your Enthusiasm” and “Saturday Night Live.” While the academy has previously acknowledged David for writing and producing, they have not yet awarded him as an actor. David’s submission coupled with his long wait for another Emmy — he hasn’t won in 25 years — could help him in this year’s derby.

David faces stiff competition from many Emmy favorites in this category. Last year’s victor Donald Glover returns to defend his title for the critically acclaimed second season of “Atlanta.” Two-time Emmy winner William H. Macy, on the heels of his 2018 SAG win for “Shameless,” also returns to the Emmy derby with his fifth consecutive bid for the Showtime series, though he hasn’t won for this role. Fellow television favorite Ted Danson landed a bid for “The Good Place” after dominating this category in the 1980s and 1990s with 11 straight nominations and 2 wins for “Cheers.” Like David, Anthony Anderson may also seem overdue, now on his fourth nomination in a row for “Black-ish” without a victory, and those don’t even count his Best Comedy Series nominations as a producer. Also not to be counted out is Bill Hader, whose freshman comedy “Barry” made a big splash with Emmy nominators, including four for Hader as a writer, director, producer and actor, so he could be a dark horse.

David has submitted episodes like “Fatwa!” to voters in the past, but those choices never led to Emmy gold. In 2010 David submitted the 42-minute season seven finale “Seinfeld,” a meta-episode in which the quartet of “Seinfeld” actors reunite with David to film a reunion special, but the real-life Larry lost the trophy to Jim Parsons (“The Big Bang Theory”). In 2004 David submitted an episode similar in theme to “Fatwa!”: the 59-minute season four episode “Opening Night” in which Larry makes his musical debut in a production of Mel Brooks’s “The Producers,” but that submission lost out to Kelsey Grammer (“Frasier”). So while “Fatwa!” may be a great submission in its own right, David’s Emmy history might signal that it won’t help him prevail.

MAKE YOUR PREDICTION: Who'll win Best Comedy Actor?
To save your prediction, you must log in to Gold Derby. Click here to sign in with existing account -- or create a new one.
PREDICTthe Emmy winners now; change them until September 17