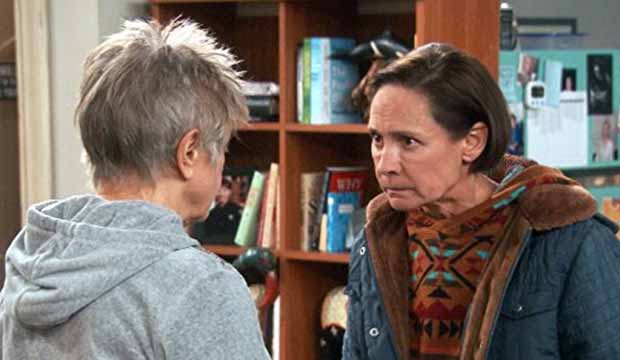 After 19 long years “Roseanne” returned to the small screen this past spring for its 10th season on ABC. But then it was abruptly cancelled after racist tweets by Roseanne Barr. Nevertheless, Barr’s co-star Laurie Metcalf, who reprised her role as Roseanne’s sister Jackie Harris, still earned an Emmy nomination for Best Comedy Supporting Actress. This is her 5th bid for her work on this show and her 11th Emmy nom overall. Out of her four previous nominations for this show (1992-1995), she took home the Emmy three consecutive times (1992-1994), but those are her only three wins to date.

She submitted the episode “No Country for Old Women” to Emmy judges for consideration. In this installment, Jackie and Roseanne argue over who is going to care for their mother, Beverly (Estelle Parsons), who has just been kicked out of her nursing home. Jackie reluctantly takes her in, but quickly regrets her decision after several arguments with her stubborn mom.

When Beverly goes missing Jackie teams up with Roseanne to find her, and she’s surprised to discover that she is staying with Becky (Lecy Goranson). But after Beverly finds out that she may be sent to a county home Jackie stops her from jumping out of a window by begrudgingly admitting that she loves her. In the end they agree to smooth out their relationship, and Jackie brings her mother back home with her.

Will Metcalf be able to prevail despite the controversy surrounding “Roseanne”? Let’s dive into the pros and cons.

From her Academy Award nomination for her supporting performance in “Lady Bird” to her recent Tony win just a few months ago for her featured role in “Three Tall Women” (her second Tony in as many years), Metcalf has gotten a lot of attention this year. That kind of visibility might make all the difference in a crowded category with eight nominees, where she could theoretically win with 13% of the vote. And Emmy voters may want to award her as a consolation prize for losing the Oscar and most other major precursor awards to Allison Janney (“I, Tonya”).

Despite the cancellation of “Roseanne,” Metcalf was still able to pick up this nomination. In fact, she’s the sole acting nom for the show, which shows that there is passion for her in the actors branch of the academy. By giving her the statuette, voters could give her a sympathetic hug for weathering the storm surrounding the show.

Metcalf has become a household name, particularly for Emmy voters in this category, so they might check her off on name-recognition alone.

Giving Metcalf the prize may feel like rewarding the tainted series, which might scare off some voters. Last year the television academy awarded politically themed shows like “The Handmaid’s Tale” and “Saturday Night Live” in major categories. Would a win for “Roseanne” feel like a contradiction?

With the show having only one other nomination, Best Picture Editing (Multi-Camera Comedy), it might be difficult for Metcalf to prevail in a category where six of the other seven nominees are in shows nominated for either Best Comedy Series or Best Variety Sketch Series.

Metcalf’s last Emmy win was 24 years ago, which may be an indication that voters don’t feel an urgency to give her Emmy number-four. And this category gives them a chance to anoint a first-timer like Alex Borstein (“The Marvelous Mrs. Maisel”), Zazie Beetz (“Atlanta”), Leslie Jones (“SNL”) or Aidy Bryant (“SNL”).

MAKE YOUR PREDICTION: Who'll win Best Comedy Supporting Actress?
To save your prediction, you must log in to Gold Derby. Click here to sign in with existing account -- or create a new one.
PREDICTthe Emmy winners now; change them until September 17