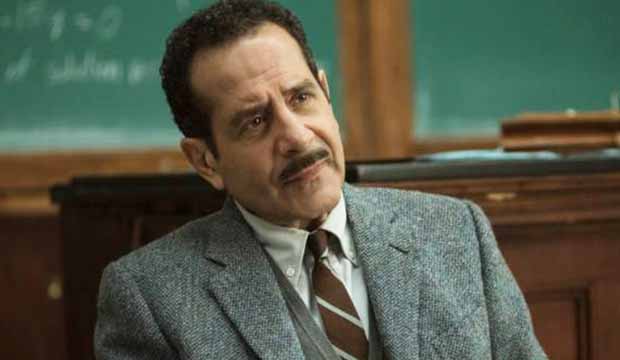 Tony Shalhoub is back at the Emmys, earning his ninth career nomination for his role as Abraham Weissman, the father of the title character in Amazon’s “The Marvelous Mrs. Maisel.” It’s Shalhoub’s first nomination for Best Comedy Supporting Actor. He earned his eight previous bids for Best Comedy Actor as the title detective on “Monk,” winning in 2003, 2005 and 2006. And this past June he took home his first Tony Award as Best Actor in a Musical for “The Band’s Visit.” Could he end his summer with an Emmy to go along with it?

Shalhoub has submitted the season finale, “Thank You and Good Night,” to Emmy voters. In the episode, Midge (Rachel Brosnahan) tells Abe that she is planning to reunite with her cheating husband Joel (Michael Zegen). Abe is in the doghouse with his wife Rose (Marin Hinkle) after introducing Midge to a divorce attorney, so he unloads on Midge for turning their family upside down, forbidding her from being happy.

Later, when Midge confesses that she’s afraid Joel won’t be able to accept how much she has changed, Abe recalls how his marriage to Rose has evolved over the years. He remembers a more carefree Rose, but even though she has changed, he still loves her. He then reluctantly gives Midge his blessing, but says that if matters become any more complicated, he may have to kill her.

Will Shalhoub’s performance earn him Emmy number-four? Let’s look at the pros and cons.

Shalhoub shows a great amount of range in his submission as Abe vacillates between rage at his daughter’s choices and tenderness as he reminisces about his marriage. And despite his frustration with Midge, we see that Abe truly loves his daughter and values her happiness, a universal emotion that makes us empathize with his character.

Emmy voters love speeches. In the space of one scene, Shalhoub gets not one, but two dynamite monologues that are completely different from each other in tone and content, giving him a true acting showcase for voters who watch each submission.

Shalhoub’s status as an Emmy favorite, coupled with his recent Tony win, will keep him on the forefront of voters’ minds. And since it has been over a decade since his last Emmy win, voters may see this as an opportunity to welcome him back to television.

Shalhoub’s performance is essentially limited to a four-minute scene that occurs almost forty minutes into the episode. Even if voters watch long enough to see Shalhoub’s scene, they may choose to honor a nominee with more screen time in his submission.

Emmy voters tend to reward big comedic performances in this category, and Shalhoub’s more restrained performance may be overlooked in favor of the more overtly comedic stylings of his competitors.