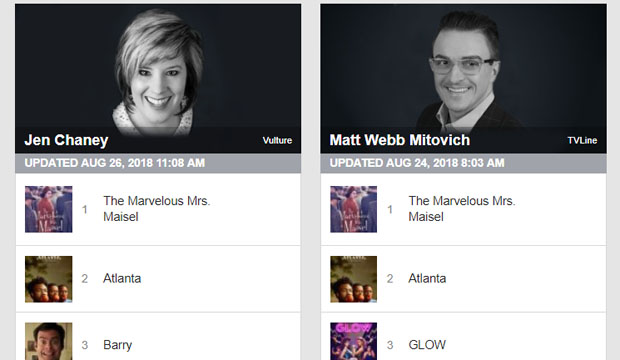 Fans of “The Marvelous Mrs. Maisel” have good reason to feel truly marvelous right now – the Amazon series just leapt ahead of “Atlanta” in the tight Emmy race for Best Comedy Series thanks to the backing of two Experts who logged their predictions today at Gold Derby: Matt Web Mitovich (TVLine) and Jen Chaney (Vulture).

See how their picks compare side by side with the rankings of our other 20 Experts. See all of Matt’s picks here; Jen’s predictions here.

Previously, “Mrs. Maisel” had been neck and neck with “Atlanta” over the past 10 days while each contender had the support of 10 Experts. Prior to that, the two ponies jockeyed back and forth in the lead position every few days since Emmy nominees broke out of the gate back in mid-July. Thus the category has been a real horse race – and a dizzying one.

The reason: Compelling arguments can be made for each rival claiming the purse for Best Comedy Series.

Last year “Atlanta” won top Emmys for Best Actor and Director for Donald Glover and it probably would’ve snagged Best Writing, too, if it hadn’t split its votes between two nominations in that contest. The program might’ve nailed Best Comedy Series, too, but category hog “Veep” prevailed for the third year in a row. But now “Veep” isn’t competing (it’ll be back in 2019), so the path is clear for a new victor. Will that be “Atlanta” because it’s presumably next line for the crown after triumphing at the Golden Globes, TV Critics’ Association trophies and Producers’ and Writers’ Guild Awards in 2017?

Good early omen: This year “Atlanta” more than doubled its number of Emmy nominations, climbing to 16 from 6. Among its bids are those key tea leaves in the crafts that we pundits seek as evidence of trans-academy support – like casting and sound mixing.

But “Atlanta” has its drawbacks as a contender: It’s not a gigglefest. Too dramatic? Usually, knee-slappers dominate. That’s been the case for decades, with one notable recent exception: “Ally McBeal” (1999).

Curiously, that’s the same TV show that is an exception to another Emmy “rule”: one-hour programs can’t get the last laugh as Best Comedy Series. Is that really true? Or laughable? If true, it dooms “Mrs. Maisel.” But the Amazon candidate has so many other big plusses, including an impressive tally of 14 nominations (2 less than “Atlanta”) in key areas usually considered essential: series, acting, directing, writing, even casting and cinematography. “It has been over a decade since the winner of Best Comedy Series was not up for Best Comedy Casting,” notes our contributor Riley Chow. I highly recommend that you read Riley’s full analysis of how those crafts categories often foretell the top prize.

Being new, “Mrs. Maisel” has the break-out momentum. Just like “Atlanta” had swept many top Golden Globes, guild and critics’ awards prior to its debut at the Emmys last year, “Mrs. Maisel” has been on a similar kudos march in 2018.

Confused yet? Hold your horses, Derbyites! Yes, “Mrs. Maisel” just pulled back out front again among our Experts, but “Atlanta” has held a steady and consistent lead among predictions by our Editors, Top 24 Users, Top 24 All Stars and all Users.

Who’s right? Make your predictions here and tell us!