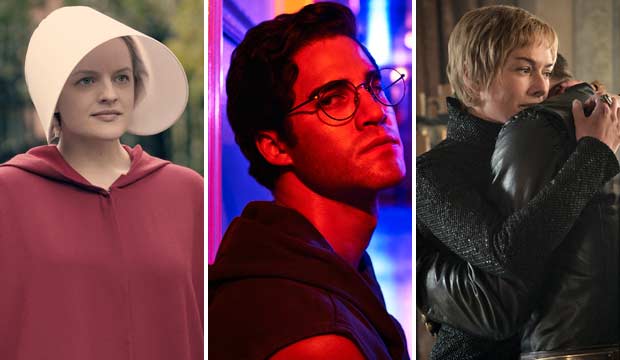 There will be 26 awards handed out at the Primetime Emmys telecast on Monday night, September 17, and based on our predictions “The Assassination of Gianni Versace” and “The Handmaid’s Tale” will be the top winners with four apiece. They’ll be followed by “Atlanta” with three victories and “The Americans,” “The Marvelous Mrs. Maisel” and “Saturday Night Live” with two each. But noticeably missing from our predictions is “Game of Thrones.” Scroll down to see our complete list of predicted winners by show.

Our predictions are based on the combined forecasts of thousands of Gold Derby users, and it may be surprising that our collective wisdom is discounting “Thrones” considering that it dominated the Emmys the last two times it was eligible. It won Best Drama Series, Best Drama Writing and Best Drama Directing in both 2015 and 2016. It took 2017 off due to its extended hiatus, but it came roaring back in 2018 with 22 nominations, more than any other program. And at the Creative Arts Awards held over the weekend of September 8-9 it claimed seven prizes, tied with “SNL” as the biggest winner.

But it has never faced “The Handmaid’s Tale” in top categories before. Hulu’s dystopian drama swept its telecast races in 2017, winning everything it was nominated for: Best Drama Series, Best Drama Actress (Elisabeth Moss), Best Drama Supporting Actress (Ann Dowd) and Best Drama Writing and Best Drama Directing for the pilot episode, “Offred.” Our users think it will carry that momentum into 2018 with another dominant night where it’s tipped to repeat in four categories: Drama Series, Drama Actress (Moss), Drama Supporting Actress (this time for Yvonne Strahovski) and Drama Directing (for the episode “After”).

However, even if “Thrones” has an uncharacteristically bad night it could take back the Iron Throne in 2019. The HBO epic fantasy will be eligible for its eighth and final season, and “Handmaid’s” might not return with new episodes in time to challenge it. So whatever happens on September 17, Khaleesi can bide her time. Winter is coming.

SEEEmmy predictions 2018: Complete racetrack odds in all 26 categories to be presented on September 17