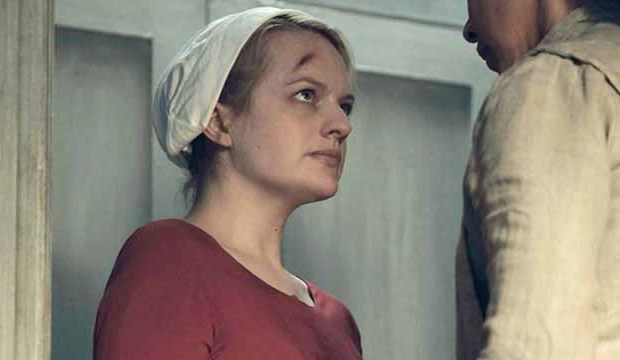 After losing a whopping six Emmys for “Mad Men,” TV academy members are poised to make it up to Elisabeth Moss in a big way. She just won Best Drama Actress for “The Handmaid’s Tale” last year, and now she’s on track to claim a bookend trophy, according to Gold Derby’s Emmy predictions. (Since she’s a producer on the Hulu hit, she won a second trophy last year and is likely to win another this year, for a total of four.) One of the major pluses in Moss’ favor is that there’s no clear runner-up in sight. In fact, you could make a strong case for all of her co-nominees, which likely will cause a split vote for second place and help Moss claim victory again.

Of Gold Derby’s 26 Emmy Experts from major media outlets, Moss is predicted to win by 17 of them, resulting in leading 1/2 odds. She plays June/Offred on “The Handmaid’s Tale,” a woman who lives as a concubine for the rich and powerful in a dystopian future. She’s submitted the episode “The Last Ceremony” for Emmy consideration in which she goes into false labor and is then raped by the Commander (Joseph Fiennes) and Serena Joy (Yvonne Strahovski).

SEE 2018 Emmy predictions panic! Can ‘The Handmaid’s Tale’ hold its own against ‘Game of Thrones’ for Best Drama Series? [WATCH]

Far down our winner’s chart in second place with 13/2 odds is Sandra Oh (“The Killing”), who’s predicted to win by five Experts. BBC America’s “Killing Eve” marks the sixth career Emmy nomination for Oh after earning five consecutive bids for “Grey’s Anatomy” (2005-09). She portrays MI5 officer Eve Polastri who’s hot on the trail of international assassin Villanelle (Jodie Comer) in her episode submission, titled “I Have a Thing About Bathrooms.”

Claire Foy (“The Crown”) is the pick of one Expert, with third-place odds of 17/2. TV’s reigning two-time SAG winner left Netflix’s regal drama along with the rest of the main stars in a massive re-casting ahead of Season 3, so she could get some extra votes from TV academy members who want to honor her while she still can. In her episode submission “Dear Mrs. Kennedy,” Foy’s Queen Elizabeth II and Jodi Balfour‘s Jackie Kennedy take a private tour of Buckingham Palace.

In fourth place at 14/1 odds is Keri Russell (who’s the pick of 3 Experts) for the final season of FX’s “The Americans.” Russell has long been a TV favorite thanks to her breakout role on “Felicity,” which earned her a Golden Globe in 1999. She is now on her third Emmy bid for FX’s “The Americans” (2016-18) for playing Russian spy Elizabeth Jennings and is hoping to win with her episode choice “The Summit” in which she seduces a young government worker but can’t bring herself to kill him.

Rounding out the category, Tatiana Maslany (“Orphan Black”) is fifth place at 66/1 odds and Evan Rachel Wood (“Westworld”) is last place at 80/1 odds. Maslany just won this category in 2016, the last time she was eligible. If there’s still love for her multiple performances on the BBC America drama, she could easily stage another upset on Emmy night. And Wood’s HBO robot drama was airing during the voting process, so she could be top-of-mind on many voters’ ballots.