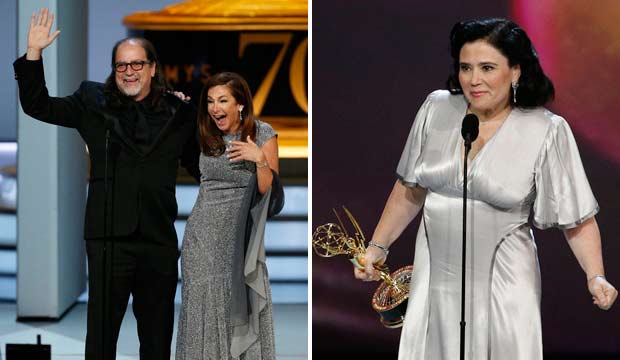 The 2018 Emmy Awards honored a plethora of the season’s best television programs. And the ceremony itself did not disappoint when it came to memorable acceptance speeches. Some were poignant and inspiring, while others went for gut-busting laughs. There were also, however, the occasional speeches that didn’t quite hit the mark. With the ceremony now behind us, let’s take a look back at a handful of the best and worst acceptance speeches from the 2018 Emmys. And check out the complete list of winners here.

King was visibly shocked, as were presenters Leslie Jones and RuPaul, when she pulled off one of the evening’s biggest upsets for her portrayal of grieving mother Latrice Butler on “Seven Seconds,” a series which, despite critical acclaim, was cancelled by Netflix after one season. The actress also has a pair of Emmys under her belt for “American Crime” (Best Movie/Mini Supporting Actress, 2015-2016), but she was still so overwhelmed this time around that she said, “I want to curse,” before ultimately proclaiming, “Thank you, Jesus!”

More than four decades since his first nomination for “Happy Days,” Winkler at last scored his elusive first Primetime Emmy victory for his scene-stealing turn as acting teacher Gene Cousineau on “Barry.” Winkler was positively ebullient as he took to the stage to a standing ovation from the audience. And he acknowledged the long wait by saying about his speech, “I wrote this 43 years ago!” The veteran actor ended with a hilarious nod to his adult children Max and Zoe, telling them “You can go to bed now! Daddy won!”

SEEEmmys 2018: In Memoriam remembers Anthony Bourdain, Burt Reynolds but who was left out?

Borstein made the most fabulous entrance of the evening as she took to the stage to pick up her Emmy, untying part of her gown — which happened to be her wedding dress from 20 years ago — and doing a sensational shimmy down the aisle. The actress and comedian, triumphing for her turn as Susie Myerson, the title character’s manager on “The Marvelous Mrs. Maisel,” revealed she was not wearing a bra, encouraged women not to pee on toilet seats, and said to series creator Amy Sherman-Palladino, “I love you and I hate you.”

Five years following her irresistibly awkward acceptance speech for Comedy Supporting Actress for “Nurse Jackie,” Wever was again in memorable form as she picked up her second Emmy, this time for playing widow Mary Agnes on “Godless.” Wever again turned in a genuine, somewhat rambling but altogether enchanting speech, admitting her surprise that the Emmys “made a space for me and made a space for Mary Agnes.”

Emmy mainstay Weiss — this year marked his 14th win — managed to deliver one of the most unforgettable awards acceptance speeches in recent memory. After opening with a heartfelt tribute to his late mother, Weiss took an unexpected turn when he revealed the engagement ring his father placed on his mother’s finger 65 years ago. Weiss brought his girlfriend Jan onstage, where he proposed marriage to the delight of the audience. She said yes, and the rest is Emmy speech history.

No offense to Dinklage, a marvelous actor, but even he seemed underwhelmed by his third Emmy victory for portraying Tyrion Lannister on “Game of Thrones.” Dinklage’s acceptance was subdued and fleeting, a shortlist of ‘thank you’s that couldn’t help but pale in comparison to the evening’s otherwise sparkling speeches.

Daniels devoted his Emmy for playing outlaw Frank Griffin on “Godless” to his horse on the series, Apollo. Daniels noted that Apollo, who was also Jeff Bridges’s horse in “True Grit” (2010), threw the actor off its back three times, on the last occasion breaking his wrist. While equestrians may have gotten a kick out of Daniels’s story, his otherwise verbose acceptance was decidedly not among the evening’s most fetching speeches.