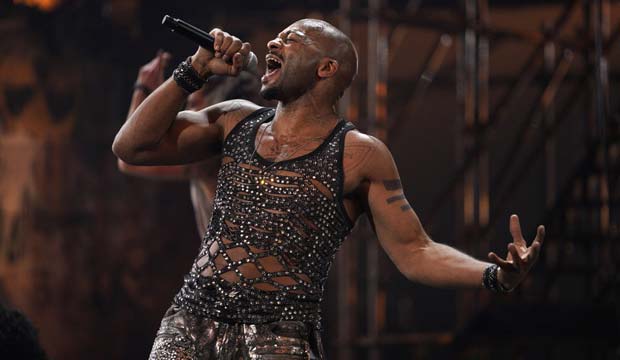 NBC’s live April 1 production of “Jesus Christ Superstar” came with the combined star-wattage of A-list musicians John Legend as Jesus, Sara Bareilles as Mary Magdelene and Alice Cooper as King Herod. But the story on Monday morning might be Brandon Victor Dixon as Judas Iscariot, who betrayed Jesus and stole the show out from under him too.

While Legend, Bareilles and Cooper are best known for their work in recording studios, Dixon is best known for his performances on the stage. He made his Broadway debut as Harpo in the original production of “The Color Purple,” which ran from 2005-2008. He was nominated for his first Tony for that role, Best Featured Actor in a Musical in 2006, though he lost to Christian Hoff for “Jersey Boys.”

He followed that with “Motown,” in which he played Berry Gordy from 2013-2014, and then “Shuffle Along” (2016), which earned him his second Tony bid for Best Featured Actor in a Musical. He lost that award to Daveed Diggs for “Hamilton,” but Dixon ended up in that musical too: he replaced Leslie Odom Jr. as Aaron Burr and spent a year in the role (2016-2017). Dixon even made headlines when in November 2016 Vice President-elect Mike Pence attended the show and Dixon led the cast in addressing their concerns about Donald Trump‘s xenophobic rhetoric.

Dixon has also worked behind the scenes as a Broadway producer through the production company Raise the Roof, and in that capacity he won the 2014 Tony Award for Best Musical Revival for “Hedwig and the Angry Inch.”

The actor has also had a handful of TV roles, including a recurring role in Starz’s “Power” and guest turns on “The Good Wife” and “Law and Order: Criminal Intent,” but he’s not the household name that his “Superstar” co-stars are, so he flew somewhat under the radar going into the live broadcast.

However, the character of Judas doesn’t fly under the radar in any circumstance. The show opens and closes with Judas numbers, and he has arguably the most dramatic arc (2,000-year-old spoiler alert: his inner conflict over his betrayal of Jesus leads to his suicide). To date the show has been staged on Broadway four times, and the only two Tony nominations the show has ever received for acting have been for actors playing Judas: Ben Vereen in 1972 for the original production and Josh Young in 2012 for the third revival, both of whom were up for Best Featured Actor in a Musical.

Given Dixon’s Broadway experience it’s no surprise that his vocals are a match for his impressive co-stars Legend and Bareilles, but it’s the anguish he imbues his performance with that sets it apart from the rest of the impressive cast, particularly in “Damned for All Time” when accepting his 30 pieces of silver for informing on Jesus to Caiaphas, and in “Judas’ Death” when the deed is done and he can no longer live with the consequences. And it’s a testament to his dramatic range that he brings the energy and joy back into the room when he performs the show’s signature number, “Superstar,” shortly thereafter in a walking mirror-ball of a costume that an actor with less charisma never could have gotten away with.

SEEEmmys 2018: Will Michael Stuhlbarg be redeemed after Oscar snub with an Emmy bid for ‘The Looming Tower’?

Variety critic Maureen Ryan wrote that Dixon “gave heft, complexity and a majestic fatality to his Judas” and that the show is “generally mesmerizing” when he’s on stage. Kristen Baldwin (Entertainment Weekly) adds, “Dixon carries much of the story’s emotional weight, which he handles as deftly in his character’s quiet moments of torment … as he does in his dazzling, cathartic performance of the musical’s 11 o’clock number, ‘Superstar.'” And Hanh Nguyen (IndieWire) said, “Brandon Victor Dixon just melted my face off. Well done.”

Will the Emmys take notice too? So far none of the live musicals that have aired in recent years have broken through in acting categories, despite strong Emmy showings for “Grease Live” in 2016 (five wins out of nine nominations) and “Hairspray Live” in 2017 (three wins out of seven nominations). But a respected theater vet like Dixon in an emotionally complex and theatrically showy role like Judas could be a force to be reckoned with for Best Movie/Mini Actor, where NBC is currently planning to campaign him.