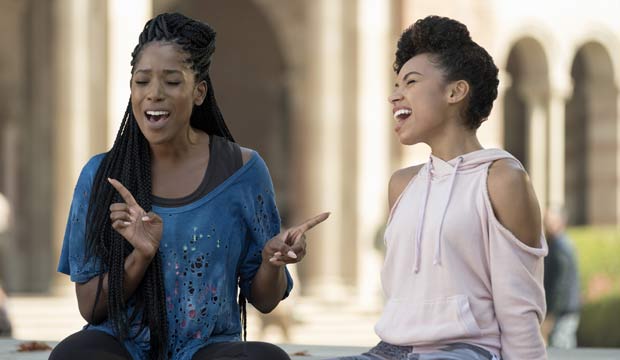 “Dear White People” premiered its first season in the spring of 2017, and its take on race relations and student protest felt timely in the early months of the Donald Trump administration, but it was actually done shooting by election day in 2016, so it wasn’t in a position to directly comment on his presidency. We might expect, then, for season two (which premiered May 4) to be a much more direct rebuttal to Trumpism. However, Volume 2 of the satirical series addresses the current climate by going deeper into its established characters and stories instead of wider into the world of national politics. Creator Justin Simien and company think globally but tell stories locally. The personal is political. But will it get the attention of Emmy voters this time after it was snubbed in season one?

The show picks up right where season one left off. Golden boy Troy Fairbanks (Brandon P. Bell) fell from grace after he shattered a window during a student protest. And it was revealed that wealthy donors to the fictional Winchester University tried to use their money to leverage the integration of the predominantly black Armstrong-Parker residence hall. Well, those donors got their wish in an unexpected way: a fire in another residence hall leaves its students homeless, and those predominantly white refugees wash up on the shores of AP.

That’s part of the season-long arc, but the show is still structured, episode-by-episode, as a series of short stories that center a different character’s point of view. Those characters are so individually distinct that they provide a kaleidoscope of black experiences: from outspoken mixed-race activist Sam (Logan Browning), to gay wallflower Lionel (DeRon Horton), to politically savvy Coco (Antoinette Robertson).

But while the structure of the show remains consistent, it also feels thematically and artistically more ambitious with what Sonia Saraiya (Vanity Fair) describes as “razor-sharp editing, gorgeous lighting and production design, and a self-conscious camera that gazes at the cast with barely suppressed love.” While exploring the current conflicts on the Winchester campus, the show also weaves in flashbacks to the history of the institution — and by extension the history of America — on which modern inequality has been built. “I personally was invested in figuring out how we got here. I had a sense of urgency to understand my country better,” said Simien in a recent interview with The Daily Beast, and the resulting episodes show “increased confidence in the types of stories it can tell, the depth of subject matter it can attack and the wide tonal palette it feels comfortable with,” says Daniel Feinberg (Hollywood Reporter).

So the show gives us a lot of current cultural references we recognize, including the Sunken Place, alt-right trolls — including one in the Milo Yiannopoulos mold — and a controversial right-wing pundit who has been invited to speak on campus. But “Dear White People” is less interested in Trump and his presidency — he’s hardly mentioned at all — than it is in the environment that enables him. It’s the toxic background radiation these characters struggle to live through and clean up. At the end of each episode the featured character looks directly into the camera, pulling us even more deeply into their point of view and giving us a feeling of shared experience: this isn’t just their story, it’s ours too.

But while “Dear White People” is “Netflix’s best series,” according to Ben Travers (IndieWire), it hasn’t gotten the same kind of love from the television academy: season one received no Emmy nominations. That could change this year, though, as it resonates even more strongly after almost 18 months of Trumpian madness — has it really only been that long? And Hollywood is showing signs that it’s increasingly open to stories by black creators about specifically black experiences: Emmys for “Atlanta,” an Oscar for “Get Out,” critical plaudits and box office domination for “Black Panther.” “Dear White People” deserves the same level of recognition. So dear Emmy voters, please take a look at season two.