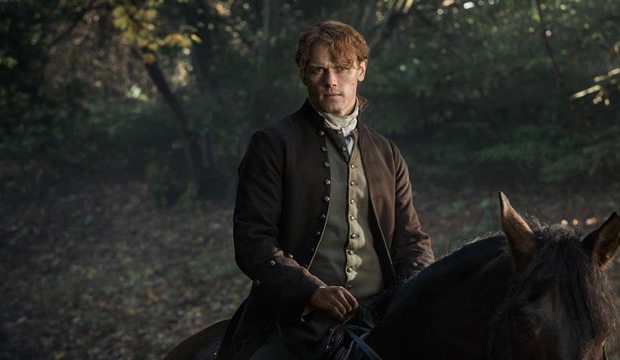 Sam Heughan is more than just a pretty face. He’s a skilled and talented actor whose portrayal of Jamie on “Outlander” should not be overlooked again by the Emmys, though he missed the cut in the first two seasons of Starz’s popular time-travel romance. Can he overcome the Emmys’ “Slap the Stud” curse?

The Emmys have had a long history of slapping handsome leading men — it took them eight years to finally give Best Drama Actor to Jon Hamm for “Mad Men” and six years to even nominate Kit Harington for “Game of Thrones.” But could the tide be turning? Sterling K. Brown (“This Is Us”) won Best Drama Actor just last year and his co-star Milo Ventimiglia was nominated alongside him. And relative youth didn’t stop actors like Aaron Paul (“Breaking Bad”), Rami Malek (“Mr. Robot”) and Riz Ahmed (“The Night Of”) from collecting trophies. Heughan deserves similar consideration.

Jamie (Heughan) spent half of the third season centuries apart from the woman he loves, Claire (Caitriona Balfe). This may have been torture for the show’s fans, but it allowed both Balfe and Heughan the opportunity to shine individually. But Heughan was at his series best in their reunion episode, “A. Malcolm.”

As Claire shows Jamie pictures of their daughter Brianna (Sophie Skelton), already grown, his steely glare slowly breaks as he becomes emotional over how much of her life he’s missed. His shock slowly wears off as he and Claire reacquaint themselves with each other until it’s as if no time has passed at all.

He was praised by critics for his performance. Kayla Kumari Upadhyaya (A.V. Club) declared, “Heughan is doing a lot of the heavy-lifting, bringing emotional layers and conviction.” Team TVLine was impressed by his performance in “A. Malcolm”: “He’s excellent throughout the episode — note how often Jamie looks at Claire as though he can’t quite believe she’s really there.” And Ed Power (Telegraph) said, “Heughan is fantastic – smoldering as required yet also communicating genuine human need and vulnerability.”

Thus far Starz has only scored three above-the-line nominations at the Emmys, and only on the movie/miniseries side. Their first was Best Movie/Miniseries for “The Pillars of the Earth” in 2011. Then in 2014 the pay-caster landed a Best Limited Series nom for “The White Queen.” That same year the network earned its only acting nomination to date: Best Movie/Mini Actor for Chiwetel Ejiofor (“Dancing on the Edge”).

But the television academy has welcomed new players to the Emmy game before. Just last year Hulu became the first streaming service to win a series prize (Best Drama Series for “The Handmaid’s Tale”). Surely if they’re willing to recognize a streaming service at such a high level then the days of network prejudices should be behind us, shouldn’t they?

In its first two seasons “Outlander” only received three nominations. For its first season it scored a single nomination for Best Original Dramatic Score for the episode “Sassenach” in 2015. And for its second season, where the first half was set in 18th-century Paris, they deservedly received noms for Best Costumes (Period/Fantasy) for the episode “Not in Scotland Anymore” and Best Production Design (Period).

Will the actors branch open its arms to “Outlander” the way the craft branches have? Either way Heughan will always have his golden pineapple from Gold Derby.