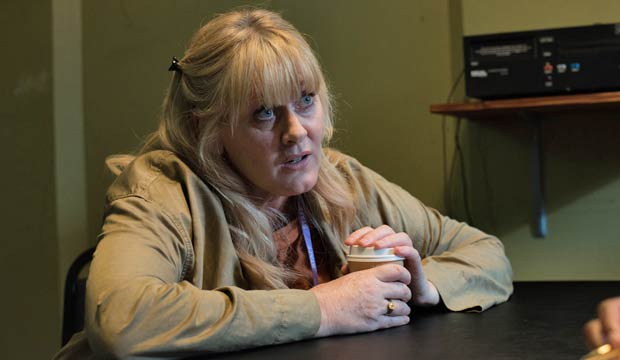 The four-part limited series “National Treasure: Kiri” premiered on Hulu on Wednesday, April 4, following the story of the title character, a foster child whose tragic disappearance results in a national controversy in England. Among the highlights of the series is Sarah Lancashire as the social worker who may have been inadvertently responsible for Kiri’s fate. The veteran actress has been a darling of the BAFTAs in recent years. Can she break through on this side of the Atlantic with her first Emmy nomination and win?

Lancashire’s character, Miriam Grayson, is happy-go-lucky when we first meet her, chipper about Kiri’s impending adoption, confident in her duties as a care worker after years of experience, and doting with her old flatulent dog. But when the crisis unfolds Miriam starts to unravel, careening between righteous indignation and overwhelming guilt, and descending deeper and deeper into alcoholism. It’s a wide-ranging performance that includes a powerful, indignant speech in which she defends her actions to an unrelenting mob of reporters, and follows that later on with an equally affecting scene in which she breaks down inconsolably when her former case subjects try to convince her of all the good she has done.

Ellie Harrison (RadioTimes) wrote that Lancashire’s performance is “staggering” and full of “incredible nuance.” Ian Sandwell (Digital Spy) adds that she’s “predictably brilliant in the darker scenes” but also gets opportunities to demonstrate her “lighter side.” And Maureen Ryan (Variety) says, “Lancashire depicts her regret with indelible, heart-rending precision.” Will this showcase role get her into a crowded Emmy race for Best Movie/Mini Actress?

Most awards voters haven’t caught on to her yet here in America — besides a 2016 Critics’ Choice nomination for Best Movie/Mini Supporting Actress for “The Dresser” — but in recent years she has been a darling of the British academy, winning twice out of five nominations at the BAFTA TV Awards. She claimed Best Supporting Actress for “Last Tango in Halifax” in 2014 and then Best Actress for “Happy Valley” in 2017 — she even beat Claire Foy (“The Crown“) for the latter award. So will the Yanks finally give her her due?