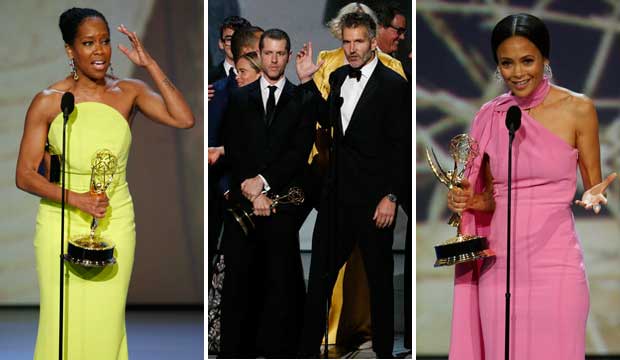 The 70th Annual Emmy Awards delivered their share of surprises and upsets. Despite the best efforts of pundits and awards-watchers to divine every outcome, TV’s biggest night upheld its reputation for major shockers. The night was full of underdogs felling front-runners, comical musical moments, and even a real-life engagement. These were the biggest shockers of the night that still have viewers picking their jaws up from the floor.

“We Solved It”
Hosts Colin Jost and Michael Che ceded opening number duties to a cast of TV favorites. Nominees Kate McKinnon and Kenan Thompson stormed the stage to deliver the news that this was the most diverse group of nominees in Emmy history. “We solved it!” Thompson proclaimed about the industry’s need for diversity. That led to a song and dance routine as the duo was joined by Tituss Burgess, Sterling K. Brown, Kristen Bell to tout the telecast’s openness to diverse talent, “but mostly Shonda Rhimes.” John Legend, Sandra Oh, Ricky Martin, and RuPaul also joined in the fun with surprise cameo appearances.

Alex Borstein Disrobes
Though she already snatched her first Emmy win for Best Voice-Over Performance at the Creative Arts ceremony, Alex Borstein couldn’t hold back her excitement for her Comedy Supporting Actress win. She stood up in the aisle and immediately began to disrobe, unfurling the shawl portion of her silver gown from her shoulders. When she reached the stage, the actress tapped her breasts and shrugged: “I went without the bra.” As the audience howled, she went on a tangent admonishing women who pee on the toilet seat and ended with a touching tribute to her children.

Bill Hader Defeats Donald Glover
It looked like the legendary Henry Winkler would be the only winner from “Barry.” But HBO proved its Emmy might when Bill Hader pulled off an upset over Donald Glover. Glover was the heavy favorite after having such a strong year thanks to “Atlanta” and his chart-topping music as his alter ego Childish Gambino. Hader was so surprised to hear his name called that he could barely finish his speech. He managed to utter a few names before becoming unable to speak and simply walking off the stage.

Merritt Wever Upsets Again
It seems that dreaded vote-splitting spelled doom for front-runners Judith Light and Penelope Cruz from “The Assassination of Gianni Versace.” That paved the way for Merritt Wever to once again come from behind for a surprise win, as she previously did when she won Best Comedy Supporting Actress for “Nurse Jackie” in 2013. Luckily Wever was more prepared for her second time at the podium and was able to get through an earnest acceptance speech.

Regina King is Emmy Queen
There is a new Emmy rule: never bet against Regina King. After two upset wins for “American Crime” (Best Movie/Mini Supporting Actress, 2015-2016) the actress has cemented herself as a TV academy favorite with her third upset, this time Best Movie/Mini Actress for “Seven Seconds.” King was nearly speechless herself at the continued support from voters. Buzzier performances from Laura Dern (“The Tale”) and Jessica Biel (“The Sinner”) were favored instead, but now we know — if Regina King is in contention, predict her for the win.

Glenn Weiss Proposes
Best Variety Special Directing isn’t known as the most exciting Emmy category. But winner Glenn Weiss (“The Oscars”) left everyone stunned. After honoring his mother, who died two weeks prior, he turned his attention to his girlfriend. “You wonder why I don’t like calling you my girlfriend?” he said to her. “It’s because I want to call you my wife.” The entire audience in the Microsoft Theater leapt to their feet in disbelief as Weiss’s girlfriend made her way to the stage. He made the proposal official by getting down on one knee and placing his mother’s ring on her finger. Thankfully, she said yes!

Thandie Newton Trounces Three “Handmaids”
Three actresses from “The Handmaids Tale” weren’t enough to stop a badass android. The Drama Supporting Actress category featured last year’s winners Ann Dowd and Alexis Bledel (who made the jump up from Guest Actress), as well as season-two breakout Yvonne Strahovski. But Thandie Newton finally cashed in on her fan-favorite status for her “Westworld” character Maeve. Newton, whose Maeve spent most of the season trying to reunite with her daughter, dedicated much of her acceptance speech to her real-life daughter.

“Game of Thrones” Reclaims Its Title
Best Drama Series prospects for “Game of Thrones” were looking grim as the night wore on. The series lost Best Drama Directing and Best Drama Writing to “The Crown” and “The Americans,” respectively. Before the top category was announced, a surprise Drama Supporting Actor win for Peter Dinklage was its only victory on the telecast. As viewers held their breath in anticipation over whether “The Crown” or “The Americans” would be named the new Drama Series winner (both series also won lead-acting trophies before the final category was announced), Kenan Thompson opened the envelope and revealed that HBO’s fantasy epic prevailed. Clearly Emmy voters can’t help themselves when it comes to the fascinating world of Westeros.