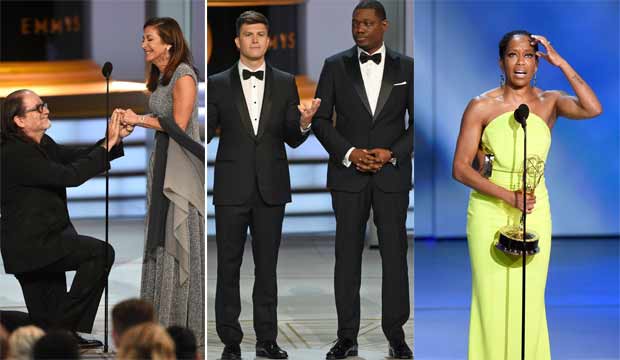 Diversity was the theme at the start of this year’s Primetime Emmys ceremony, which kicked off with a tongue-in-cheek song-and-dance number in which Kenan Thompson, Kate McKinnon and a variety of other Emmy nominated celebs congratulated the Emmys for their inclusive slate of nominees — “We solved it!” But that theme was somewhat overshadowed by a fast-paced ceremony that took risks — some more successful than others — and gave us some jaw-dropping surprise winners as well as some truly memorable speeches.

“Saturday Night Live’s” “Weekend Update” anchors Colin Jost and Michael Che served as the evening’s hosts, delivering an opening monologue that was charming, but safe. Mentions of the #MeToo movement were only tangential, particularly when they mentioned that attendees were allowed to bring drinks into the auditorium. “Because the one thing Hollywood needs right now is people losing their inhibitions at a work function,” joked Jost. But those hoping for jabs at Les Moonves came away disappointed. One has to wonder if the hosts were cautioned to avoid going for the jugular, which would have given the evening a much-needed edge.

Despite the safe nature of the material, Jost and Che were largely successful as hosts. In what is becoming a common theme at the Emmys, the rise of streaming television was the subject of one of Che’s best lines. After proclaiming that NBC received the most nominations for a broadcast network, Che equated that with “being the sexiest person on life support. It’s not great.”

Che also scored a comic hit with an inspired segment where he presented a “Reparations Emmy” — apparently stealing it from Bill Cosby — to previously unrewarded black performers including Marla Gibbs, Jimmie Walker, Kadeem Hardison and Tichina Arnold. The highlight of the segment was Che and comedian Jermaine Fowler claiming that Bryan Cranston only won his Emmys because he’s white. The camera panned to Cranston in the background, proving that the man can get a laugh without even uttering a word.

Certain bits fell completely flat. The hosts brought out Maya Rudolph and Fred Armisen as “Emmy Experts.” The joke was apparently that they didn’t know anything about the Emmys. But what exactly was the point?

Meanwhile, the telecast took a unique approach to presenting the nominees in each category, with the offstage announcer reading the nominees, followed by the presenters merely sauntering on and reading the winner. While this may have helped streamline the broadcast, it also threw the ceremony off-balance. It also occasionally highlighted the awkwardness of what little banter the presenters were given. Certain presenters were stuck with the standard platitudes, and some who tried to be funny didn’t really pull it off — did Sandra Oh really need to rip up the envelope for Best Comedy Directing?

Also, can we institute a rule where presenters have to learn how to pronounce the winners’ names? First Tracy Morgan stumbled over Best Comedy Supporting Actress winner Alex Borstein (“The Marvelous Mrs. Maisel”). Then recent EGOT-recipient John Legend butchered “Godless” winner Merritt Wever‘s name. And in Best Comedy Actress, Rachel Brosnahan (“Maisel”) was the first winner in the last seven years not to be named Julia Louis-Dreyfus. So it kind of took away from the moment when presenters Tiffany Haddish and Angela Bassett took turns mispronouncing her name.

But some of the presenters managed to make the most of their appearances. Michael Douglas killed with a funny rant imploring the losers to hold onto the rage of their losses. Aidy Bryant and Bob Odenkirk were hilarious in their deliberately stilted presentation of Best Movie/Mini Writing. And can we start a petition to have RuPaul and Leslie Jones present every award from now on?

The show was ultimately elevated by some truly lovely acceptance speeches. Best Comedy Supporting Actor winner Henry Winkler (“Barry”) brought the audience to its feet twice thanks to a boisterous and exuberant speech that was, by his count, 43 years in the making. Brosnahan used her speech to encourage people to vote in the upcoming midterm elections. At 96 years-old, television icon Betty White proved that she could still make an audience laugh. And in perhaps the upset of the night, nobody was more shocked and overjoyed about Regina King‘s Best Movie/Mini Actress win than the winner herself.

But who would have thought that the highlight of the night would be Best Variety Special Directing winner Glenn Weiss (“The Oscars”)? He began his speech by honoring his late mother, only to turn right around and propose to his girlfriend from the Emmy stage, and gave her his mother’s wedding ring! For a man who directs awards shows, he certainly knew how to create the perfect Emmy moment.