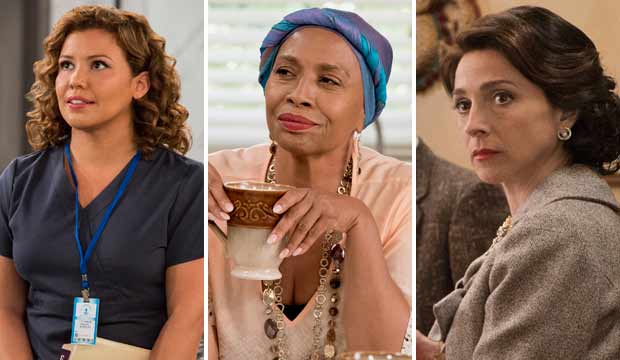 Emmy voting for the 2018 nominations ended on Monday, June 25, with the official noms set to be announced in just a few weeks on July 12. I’m a sucker for underdogs, so while I love many of of the actors who are widely expected to be nominated, there are a number of candidates I’m still rooting for even though they have distant 100/1 odds based on the combined predictions of thousands of Gold Derby users.

So I hope Emmy voters found it in their hearts to include the following six actresses when filling out their ballots earlier this month.

Even on a show full of so many other iconic historical figures, Balfour had her work cut out for her playing American first lady Jackie Kennedy in an episode of “The Crown” in season two. In just one hour she had to inhabit a character who has been played by many actresses over the years, including Natalie Portman in an Oscar nominated performance just a year earlier. But in a relatively short time Balfour is able to demonstrate the fragility, anxiety and loneliness of a woman thrust onto the world stage. She even manages to steal scenes from Emmy nominees Claire Foy (as Queen Elizabeth II) and Michael C. Hall (as President John F. Kennedy).

Browning had big shoes to fill when she took over the role of student activist Sam White from Tessa Thompson, who had played her in the preceding 2014 film. But Browning was up to the task, imbuing the political firebrand with charisma and increasing vulnerability. In season two Sam started to let down her guard, giving the actress opportunities to plumb greater depths. This was especially true late in the season when she has a ferocious two-hander with John Patrick Amedori as Sam’s ex-boyfriend Gabe, and then when she returns home to deal with a family emergency.

Alex Borstein has deservedly been praised for her performance as Susie, a pugnacious manager who takes the title character (Rachel Brosnahan) under her wing. But I hope voters also took notice of Hinkle as Maisel’s mom Rose. The “Meddlesome Jewish Mother” is a familiar cliche, but the writing and acting dig deeper. Late in the season, as her husband (Tony Shalhoub) and daughter start keeping secrets from her, she conveys the genuine hurt of losing touch with her family even when they’re all under the same roof. Frankly, I’ve been waiting almost 20 years for Hinkle to earn an Emmy nomination. She deserved at least one for her underrated performance as Sela Ward‘s younger sister in the family drama “Once and Again.”

SEEFinally, a big ‘Black-ish’ breakthrough at the Emmys?

The four episodes of the Hulu limited series “Kiri” puts Lancashire through the emotional wringer as social worker Miriam Grayson. She starts happy-go-lucky, but her life quickly collapses into alcoholism and public scorn after a young girl under her care is murdered. Miriam can be stubborn, maybe even reckless, but we sympathize with her plight as she ricochets back and forth between indignation and guilt. And the emotional fireworks she sets off are spectacular. Consider her angry speech to the reporters who keep hounding her. And compare that to a later scene where her former clients thank her for helping them, reducing her to tears.

Lewis is one of the most consistent scene-stealers on television as overbearing grandmother Ruby, but in a career spanning 30 years and shows including “A Different World,” “The Fresh Prince of Bel-Air,” “Strong Medicine” and many more she has never been nominated for an Emmy. Voters usually love this kind of role (consider Doris Roberts‘s four wins for “Everybody Loves Raymond”), and her sharp one-liners are balanced with unexpected moments of compassion, but “Black-ish” in general has struggled for Emmy recognition for its supporting cast despite consistent nominations for leads Anthony Anderson and Tracee Ellis Ross.

Justina Machado (“One Day at a Time”) — Best Comedy Actress

There aren’t many performances on TV right now as good as Machado’s, due in part to the fact that not many roles provide the kinds of wide-ranging acting showcases that Penelope Alvarez does. The character is an army veteran who suffers from post-traumatic stress disorder and depression, but Machado is equally adept at scenes of broad comedy and intense drama, like when Penelope went off her meds in season two and suffered a serious mental-health relapse. “One Day” is a multi-cam sitcom shot in front of a live studio audience, and even more than most multi-cam shows it feels like a filmed play. If she had given these performances on a Broadway stage she’d probably have a Tony by now.