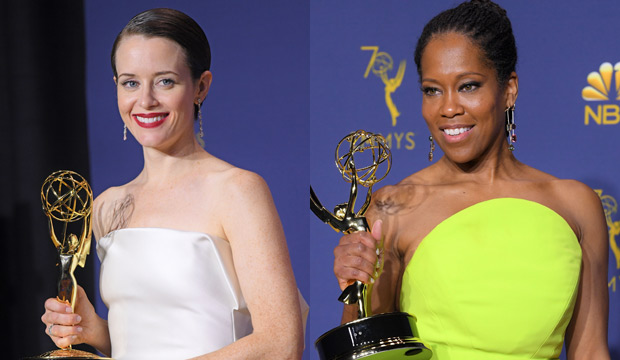 Two of this year’s surprise Emmy winners were Claire Foy (“The Crown”) for Best Drama Actress and Regina King (“Seven Seconds”) for Best Limited Series/Mini Actress. Both of those ladies are also about to head into Oscar season as each of them are already garnering buzz for their performances on the big screen. Not only could we see them compete against one another for Best Supporting Actress, but the directors behind both films have previously helmed two of the most topical movies from the 2016 Oscar race.

Foy is starring opposite Ryan Gosling in “First Man” where she plays Janet Shearon, who was the first wife of astronaut Neil Armstrong. The biopic is directed by Damien Chazelle, whose last film, “La La Land,” made him the youngest person to have ever won the Oscar for Best Director. So far, he’s also managed to direct two performances to an Oscar win: J.K. Simmons for “Whiplash” (supporting, 2014) and Emma Stone for “La La Land” (lead, 2016).

Early reviews for “First Man” have indicted Foy as one to watch throughout the season. Owen Gleiberman (Variety) writes, “As the movie goes on, Foy’s performance grows in antsy chain-smoking force, and we realize that Jan’s burden isn’t only her fear.” And David Rooney (Hollywood Reporter) notes, “An affecting performance that gracefully sidesteps cliche as she walks the line between being emotionally supportive and showing her own solid backbone and forthright, questioning nature.”

Meanwhile, King is appearing in “If Beale Street Could Talk” where she plays the mother of newcomer Kiki Layne’s character, a woman who’s trying to prove that her husband is innocent. The movie is directed by Barry Jenkins, whose last film, “Moonlight,” not only won him the Oscar for Best Adapted Screenplay, but it also famously managed to win Best Picture in a shocking upset over “La La Land.” “Moonlight” also took home Best Supporting Actor for Mahershala Ali.

Initial reviews for “If Beale Street Could Talk” have indicted King as one to watch throughout the season. Leah Greenblatt (Entertainment Weekly) calls King’s performance “phenomenal,” stating she “should probably start pulling some awards-show gowns now.” And Erik Anderson (AwardsWatch) admits, “Regina King as Sharon has always been a fierce queen but here has a platform for greatness that she more than delivers on.”