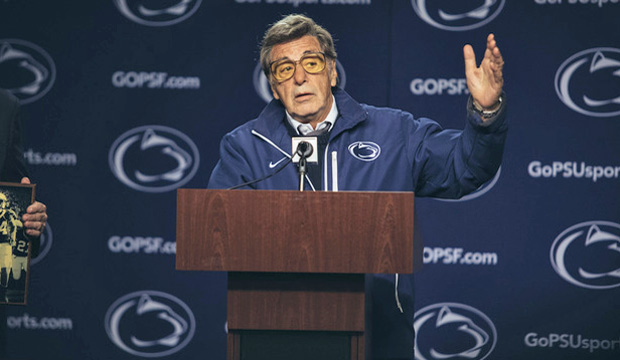 Al Pacino and HBO have proven themselves quite a strong pairing when it comes to the Emmys. “Paterno” recently aired on the network and received strong reviews for Pacino. Even prior to the film’s premiere Pacino was trending on Gold Derby’s prediction charts for Best Movie/Mini Actor. Should Pacino pull off a victory in this category it would mark the third time HBO and Pacino have teamed up for an Emmy win.

“Paterno” tells the story of famed Penn State football coach Joe Paterno, whose career ended in scandal when one of his assistant coaches was accused of sexually molesting young boys and Paterno was accused of covering up the crime. Critical reaction has been very strong about Pacino’s performance, with IndieWire calling him “remarkable” and the LA Times referring to Pacino as being “at his best.”

SEEAl Pacino movies: 25 greatest films ranked from worst to best, including ‘The Godfather,’ ‘Dog Day Afternoon,’ ‘Scent of a Woman’

Interestingly, all of Pacino’s Emmy nominations have come for playing real-life people. He won his first Emmy in 2004 for portraying lawyer Roy Cohn in the Emmy-sweeping miniseries “Angels in America.” His second Emmy came six years later in 2010 as Dr. Jack Kevorkian, a proponent of assisted suicide in the telefilm “You Don’t Know Jack.” Pacino received a third Emmy nomination (but did not win) in 2013 for his role as record producer Phil Spector in the HBO film of the same name which focused on his trial and conviction for murder.

In contrast to his three Emmy-nominated roles, only one of Pacino’s eight Oscar-nominated performances was for a true-life character: the police officer Frank Serpico in 1973’s “Serpico.” The other seven, including his Oscar-winning role in “Scent of a Woman,” were all for fictional characters.

Keep following Gold Derby’s coverage to see if Pacino is able to add a third Emmy to his awards total, which already has placed him in the acting Triple Crown category. In addition to his Emmys and Oscar, he won two Tonys early in his career for “Does a Tiger Wear a Necktie?” in 1969 and “The Basic Training of Pavlo Hummel” in 1977.