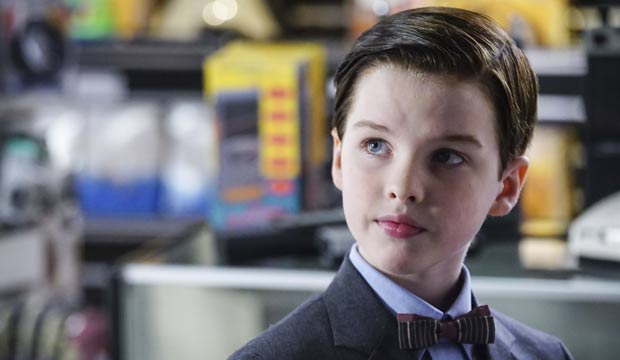 Will Iain Armitage (“Young Sheldon”) make Emmy history with a nomination for Best Comedy Actor? He turns 10-years-old this year, so if he makes the cut this summer he’ll be the youngest nominee in the history of the category and the second youngest nominee in Primetime Emmy history. Now a couple of the Expert journalists we’ve polled thus far are predicting exactly that.

To date there have only been two Comedy Actor nominees under the age of 18: Fred Savage contended for “The Wonder Years” in 1989 when he was 13, and Frankie Muniz was up for “Malcolm in the Middle” in 2001 when he was 15. The Primetime Emmys have long been hesitant to recognize child actors, with a few exceptions. Roxana Zal (“Something About Amelia”) became the youngest champ when she prevailed for Best Movie/Mini Supporting Actress in 1984 at age 14. And Kristy McNichol (“Family”) won Best Drama Supporting Actress in 1977 and 1979 when she was 15 and 17.

But no preteen has ever won, and only one has been nominated: Keshia Knight Pulliam (“The Cosby Show”), who competed for Best Comedy Supporting Actress in 1986 at age six. But Armitage is helped by the fact that he’s already familiar to Emmy voters: before his leading role in “Young Sheldon” he was featured as Shailene Woodley‘s son in the Emmy winning series “Big Little Lies.” On top of that, his character is already popular with the TV academy: “Young Sheldon” is a prequel to “The Big Bang Theory,” for which Jim Parsons won four Emmys for Best Comedy Actor (2010-2011, 2013-2014) as the adult Sheldon Cooper.

Overall, Armitage is an Emmy underdog with 80/1 odds based on the combined predictions of over 1,000 Gold Derby users, but Experts Robert Rorke (New York Post) and Ken Tucker (Yahoo) think he’ll make the cut, though Rorke thinks Eric McCormack (“Will and Grace“) will ultimately win and Tucker says the victor will be Donald Glover (“Atlanta“). Do you agree with them that Armitage will earn a historic nomination? Could he even upset to win?