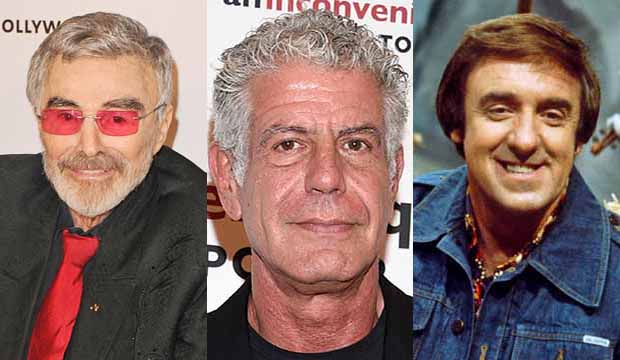 But who was missing from the memoriam this time? Some of those surprising omissions included:

The entire group of people who died in the past year numbered well over 50. Here are descriptions of the people we mentioned in the first paragraph. Those bios are followed by the remainder of people in the memoriam.

Bochco died on April 1 at age 74. The 10-time Emmy winner was the creator of such TV classics as “Hill Street Blues,” “L.A. Law,” “NYPD Blue” and “Doogie Howser, M.D.” He was inducted into the Television Academy Hall of Fame in 1996.

Bourdain died in France on June 8 at age 61. The celebrity chef was best known for his CNN program “Anthony Bourdain: Parts Unknown” and the Travel Channel series “No Reservations.” He won six primetime Emmys and one at the Daytime Emmys.

Guillaume died on October 24 at age 89. He was best known for playing butler Benson DuBois on both “Soap” and its spin-off “Benson.” He won an Emmy as Best Comedy Supporting Actor in 1979 and for Best Comedy Actor in 1985. He also starred on “Sports Night” for Aaron Sorkin and was the voice of Rafiki in the animated classic film “The Lion King.”

Hall died on September 30 at age 96. He was the host and co-creator of the game show “Let’s Make a Deal,” which launched its long television run in 1963. He received a lifetime achievement award at the Daytime Emmy Awards in 2013.

Mahoney died in Chicago at age 77 on February 4. His best known role was as Martin Crane for 11 seasons on “Frasier” opposite Kelsey Grammer and David Hyde Pierce. He received two Emmy Award nominations for that show. He performed in many stage plays and in the films “Say Anything,” “The American President,” and “Barton Fink.”

Nabors died at age 87 on November 30. He starred as the title character on the CBS comedy “Gomer Pyle, U.S.M.C.” in the 1960s. It was a character that had begun previously on “The Andy Griffith Show.”

Rae died at age 92 on August 5. She was mostly known for her long-running role on “The Facts of Life,” a spin-off of “Diff’rent Strokes” for her character. That role of Edna Garrett brought her a second Emmy nomination in 1982. She also was a two-time Tony Award nominee for “Pickwick” (1965) and “Morning, Noon and Night” (1968).

SEEBurt Reynolds dead at 82: Our appreciation of a guy’s guy and ladies’ man always having a good time

Reynolds died on September 6 at age 82 in Florida. He was an Oscar nominee for “Boogie Nights” and an Emmy winner for “Evening Shade.” He was one of the top box office stars of the 1970s with movies such as “Deliverance,” “Smokey and the Bandit,” “The Longest Yard,” “Cannonball Run” and “Starting Over.”

Simon died August 26 at age 91. He wrote more than 50 Broadway plays, including “Barefoot in the Park,” “The Odd Couple,” “Biloxi Blues,” “Sweet Charity” and “Lost in Yonkers.” He wrote the screenplays for those adaptations as well as ones for “The Sunshine Boys,” “The Goodbye Girl” and “California Suite,” all of which brought him Oscar nominations (along with ‘Odd Couple’). He was a three-time Tony Award winner and recipient of the Kennedy Center Honors.

In addition to those 10 featured above, the following people were featured in the memoriam tribute: