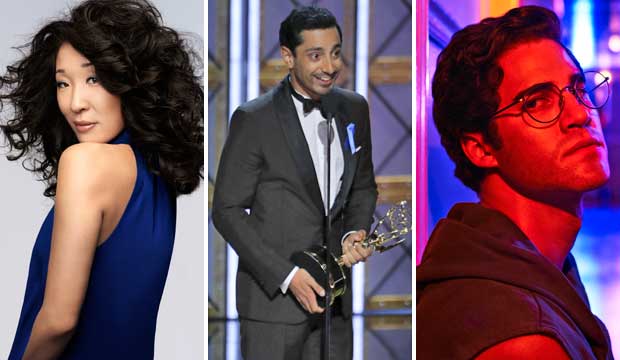 Riz Ahmed made history in 2017 by becoming the first man of Asian descent to win a Primetime Emmy for acting. The British-Pakistani performer won Best Movie/Mini Actor for his role in the crime drama “The Night Of.” That also made him the first Asian actor, male or female, to win for a leading role. This year Asian actors may break through again in leading categories as Sandra Oh (“Killing Eve”) enters the conversation for Best Drama Actress and Darren Criss (“The Assassination of Gianni Versace“) jockeys for position in the same category Ahmed just won.

The only other Asian actor to win an Emmy besides Ahmed was Archie Panjabi, who is of Indian descent. She won Best Drama Supporting Actress for “The Good Wife” in 2010. However, one may also count Iranian actress Shohreh Aghdashloo, Best Movie/Mini Supporting Actress winner in 2009 for “The House of Saddam.” Middle Eastern countries are not always considered ethnically Asian even though Iran is on the Asian continent.

Oh is Korean-Canadian, and this year she could contend for her leading role as Eve Polastri, an MI5 agent hunting down a psychopathic assassin in BBC America’s “Killing Eve.” This would be her first Emmy recognition for a leading role, but she’s no stranger to the television academy. She earned five straight nominations for Best Drama Supporting Actress (2005-2009) for playing Dr. Cristina Yang in the medical drama “Grey’s Anatomy.” She also won a Golden Globe for that role in 2006, as well as two SAG Awards: for her individual performance in 2006 and as a member of the ensemble cast in 2007. But she never picked up a win from the TV academy.

Criss previously earned one Emmy nomination for songwriting — for “This Time” from the “Glee” episode “Dreams Come True” in 2015 — but he has yet to contend for acting. Though that’s likely to change this year, according to the combined predictions of more than 1,200 Gold Derby users, who consider him the front-runner to win Best Movie/Mini Actor with leading odds of 7/2. In “Versace” he plays real-life serial killer Andrew Cunanan, who was half-Filipino, as Criss is.

Oh and Criss aren’t the only Asian actors who could win lead-acting Emmys this year. Constance Wu and Randall Park could win Best Comedy Actress and Best Comedy Actor, respectively, for playing the parents of a Taiwanese immigrant family in “Fresh Off the Boat.” But that series has been eligible for the last three years and has yet to be nominated for Emmys despite two Television Critics Association noms for Wu and multiple Critics’ Choice noms for both Wu and Park.

Including actors who descend from the Asian Middle East, first-time Best Comedy Actress contender Yara Shahidi, who spun-off her “Black-ish” character Zoey Johnson into the Freeform college comedy “Grown-ish,” is half-Iranian. And Alia Shawkat, aiming for her first Comedy Actress bid on her second try for TBS’s “Search Party,” is half-Iraqi.

Do you think this will be another breakthrough year for Asian actors at the Emmys?