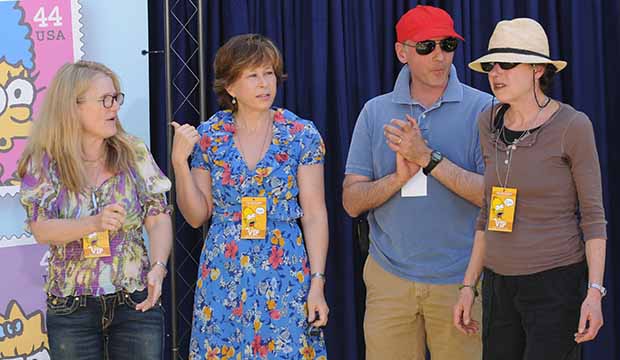 Which episodes of “The Simpsons” are the veteran cast members and some of their high profile guest stars submitting for the Best Character Voice-Over Performance category at the 2018 Emmy Awards? We’ve got the exclusive episode titles from 20th Century Fox Television below along with descriptions for each of the entries.

Unless others are submitted by their personal reps, “The Simpsons” will have the names of seven of their primary/featured cast members and four guest stars submitted on the Emmy ballot this summer in this category. Nancy Cartwright was nominated last year, but she was not on the initial list we received with episode titles. Since the ballots in this category aren’t made public, we’ll have to wait until July 12 to see if she is nominated two straight years.

SEEEmmys 2018 exclusive: 20th Century Fox Television categories for ‘This Is Us,’ ‘Modern Family,’ ‘The Orville,’ ‘The Simpsons’ and more

Dan Castellaneta will be submitting “Fears of a Clown,” the 14th episode of the season. When a prank by Bart causes the town of Springfield to develop a gigantic fear of clowns, the town’s beloved entertainer, Krusty the Klown, suffers the harshest consequences. On the advice of Lisa, Krusty decides to become a serious actor and is cast in a knock-off production of “Death of a Salesman.” On opening night, Krusty accidentally causes the audience to laugh, leading him to the conclusion that he truly is a clown at heart and proceeds to do comic hi-jinks on stage. It’s a fun choice for Castellaneta, who is choosing to showcase a character other than Homer Simpson with his episode, though Homer does get some good moments. In addition to Krusty and Homer, Castellaneta also voices Sideshow Mel and Groundskeeper Willie. This would be his fourth career nomination having won the award in 2009. He also won the honor three times when it was a juried award without nominations (1992, 1993 and 2004).

Julie Kavner is selecting “The Old Blue Mayor She Ain’t What She Used to Be,” the season’s sixth episode. When Mayor Joe Quimby addresses Marge in a condescending and sexist tone during a town hall, she decides to challenge Quimby in the next election. When she promises to put out the fire at the Springfield tire yard, she wins the election. When she’s unable to fulfill her campaign promises, the voters start to turn on her. As she attempts to win back support, the public takes a liking to the way that she ridicules Homer. Marge initially uses this to her advantage but after hurting Homer too much, she professes her love for him and Springfield becomes disappointed with Marge as mayor. Kavner gets to show Marge with a nice emotional range and also get some good lines portraying Marge’s twin sisters, Patty and Selma. If Kavner gets nominated, it will be her first formal nomination for “The Simpsons.” She received a juried award for her work in 1992. Prior to that she was nominated four times for Variety Performance in “The Tracey Ullman Show” (1987-1990) and four times for Comedy Supporting Actress for “Rhoda” (1975-1978), winning in 1978.

Yeardley Smith has chosen “Mr. Lisa’s Opus,” the 18th episode of the season. As future Lisa is writing her admissions essay to Harvard, she reflects on several birthdays that shaped her life. She first reflects on her seventh birthday when everyone forgot the occasion but was saved thanks to a tricycle gifted to her by Ned Flanders. She then reveals that on her 14th birthday, she found out that Marge was planning on leaving Homer. This causes Lisa to confront Homer about his drinking and subsequently saves Marge and Homer’s marriage. Smith gets to show Lisa being the character that truly helps the family function and that could play well with the voters for this category. Smith only has one Emmy to her name that was won in 1992 as a juried award.

Hank Azaria selected, “King Leer,” the 16th episode of this season. Homer and Marge discover that Moe has a strained relationship with his father, Morty, and his siblings, Marv and Minnie. Moe explains that his family is in the mattress selling business but had a falling out with them after the family’s stores were sabotaged. Homer and Marge attempt to salvage the relationship and, at first, it seems to have worked. But then Moe’s family turns on him and a war of constantly escalating pranks ensues. Marge eventually talks some sense into Moe by telling him that some families just don’t belong together. Moe is a favorite character for Azaria and it’s easy to see why he would choose this one as Moe gets to show a very good range of genuine emotion. He also gets to voice Carl Carlson as well in the episode. Azaria is the most decorated of all the main “Simpsons” actors at the Emmys with six career wins including four for the animated show (1998, 2001, 2003 and 2015).

Harry Shearer is submitting “Left Behind,” the 19th episode of the season. Homer helps Ned Flanders get a job at the nuclear power plant as the director of human resources. However, things start backfiring on Homer when Ned starts to tell Homer that he needs to improve his performance at work. When Ned confronts Mr. Burns about the company’s complete lack of charitable donations over the years, he’s fired. He bounces back after Marge suggests he become a teacher. At first it’s a nightmare for Ned, but with a little help from Bart, he’s able to exert control over the classroom. Shearer gets a lot of great moments for Ned and also gets to provide voices for Mr. Burns, Smithers, Lenny Leonard and God making this a great showcase for his talents. Shearer had been nominated twice as a writer, for “America 2-Night” in 1978 and “Saturday Night Live” in 1980, before he was nominated for his first Emmy for “The Simpsons” in 2009. Five years later, he would finally claim his first trophy for the series.

Pamela Hayden is choosing “Gone Boy,” the season’s ninth episode. When Bart falls down a manhole, all of Springfield starts looking for him. While Milhouse finds him and is unable to rescue Bart, the news reports that Bart has died. Milhouse doesn’t correct the mistake in order to try to win Lisa’s affection. Milhouse is ambushed by Sideshow Bob and is forced to take Bob to the manhole. Bob tries to kill both the boys by tying them to a rocket but decides against it in the end. Hayden has been voicing Milhouse for decades and this episode is a classic testament to how pathetic he can be in an enjoyable way. Hayden has never been nominated for an Emmy.

Chris Edgerly, like Hank Azaria, chose “King Leer” as his episode. He plays Moe’s brother, Marv. He gets a good amount of snappy dialogue and the fact that whatever he says tends to irritate Moe gives those lines a good comedic punch. Edgerly has been a regular on the show since 2011 and would be achieving his first nomination should he get in.

Ray Liotta also submitted “King Leer,” in which he plays Moe’s father, Morty. He gets a lot of great lines and gags about the feud that he’s had with Moe over the years and gets to give a great performance in a very distinctive voice that many probably won’t realize is Liotta. He won an Emmy back in 2005 for Drama Guest Actor for “ER.”

Martin Short is submitting the guest performance he gave in “Springfield Splendor,” the season’s second episode. A graphic novel about Lisa’s life that Marge illustrated becomes popular. An eccentric theater director, Guthrie Frenel (Short), wants to make it into a stage show. At first Lisa is excited but is very disappointed when she sees that Guthrie has made it more about Marge’s artwork than Lisa’s life. When Marge realizes this, she attempts to remedy the situation. This outrages Frenel and leads to a chain reaction that ultimately sabotages the show. Short is perfect in the role of Frenel and even with only his voice, gives the character a huge amount of wackiness. Short is already a two-time Emmy winner for Variety Writing in 1983 for “SCTV Network” and Variety Special in 2014 as the host of “AFI Life Achievement Award: A Tribute to Mel Brooks.”

Ed Sheeran guest-starred in the episode “Haw-Haw Land,” the tenth episode of the season. In an episode that’s a tribute to “La La Land,” Lisa meets and falls for Brendan, a jazz musician who’s just transferred to Springfield. This leads to Nelson getting jealous of Lisa and trying to compete with Brendan. Lisa sticks with Brendan until it’s revealed that he actually lives in West Springfield and will have to go to a different school. Sheeran brings a nice charm to the character and makes it easy to see why Lisa would fall for him. Sheeran has never been nominated for an Emmy but he does have four Grammy Awards including one for Song of the Year in 2016 for “Thinking Out Loud.”

Kelsey Grammer, like Hayden, has submitted “Gone Boy,” where he makes another appearance as Sideshow Bob. In addition to the moments mentioned above, Bob decides, after rescuing Bart and Milhouse, that he wants to do good after serving his time in prison and a flash forward shows that Bob eventually retires to a lighthouse where still finds himself going crazy over the idea of killing Bart. Grammer won an Emmy in 2006 for playing Sideshow Bob. In addition to that, he’s won four Emmys for Comedy Lead Actor for “Frasier” (1994, 1995, 1998 and 2004) and a Daytime Emmy last year for Animated Program Performer for “Trollhunters.”