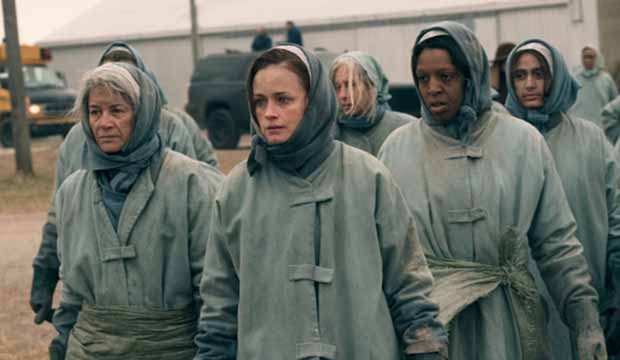 Alexis Bledel earned her first Emmy nomination and win last year, prevailing in Best Drama Guest Actress for the first season of Hulu’s “The Handmaid’s Tale.” This year, she earned her second career nomination for the show’s sophomore season, but in Best Drama Supporting Actress due to increased screen time. She reprised her role as Emily, a disobedient lesbian handmaid in a dystopian future society, and has chosen to submit the episode “Unwomen” to Emmy voters, the second episode of Season 2.

In this segment, we get to see Emily in two different timelines: when Gilead was coming to fruition and in the present. In the flashbacks, Emily is a university biology professor who’s asked by her boss Dan (John Carroll Lynch) to keep her personal life as a lesbian closeted. He adds that she’ll have less classes the following year to avoid attracting criticism for her sexual orientation. When Dan, also homosexual, is found hanged, she attempts to emigrate to Canada with her wife (Clea DuVall) and son. With same-sex marriage no longer recognized, Emily is forced to stay behind.

In the present timeline, Emily has been taken to the Colonies for her disobedience, and like all other “unwomen” must commit to slave labor. With the women’s health deteriorating due to the inhumane conditions in the Colonies, Emily takes over the role as camp doctor. When a Commander’s wife (Marisa Tomei) arrives, Emily seemingly befriends her, but ends up poisoning her for supporting Gilead’s cause, leading to her death. In her final scene, she briefly greets Janine (Madeline Brewer), who arrives at the Colonies for a crime of her own.

Can the “Gilmore Girls” vet earn her second consecutive Emmy statuette for “The Handmaid’s Tale”? Let’s dive into the pros and cons.

Not only was “The Handmaid’s Tale” able to rack up a whopping 20 nominations overall, but it also doubled its acting bids from four last year to eight this year. It has the most acting nominations of any show at this year’s Emmys, which indicates significant support for the show in the acting branch. We already know that Bledel’s performance struck a chord with voters, made evident by last year’s win for Guest Actress and this year’s nomination in supporting, despite it being a very competitive and stacked category. If “The Handmaid’s Tale” happens to go on another steamroll like it did last year, then Bledel could again be part of it.

Whether episode submissions matter or not, she chose which was arguably her strongest episode in the show’s second season, in which she has a lot of screen time and gets to show off a range of emotion. While she’s mostly subtle, she proves that she has incredible range and the ability to express any emotion with solely her eyes and facial expressions.

This time around, Bledel finds herself competing against Millie Bobby Brown (“Stranger Things”), Ann Dowd (“The Handmaid’s Tale”), Lena Headey (“Game of Thrones”), Vanessa Kirby (“The Crown”), Thandie Newton (“Westworld”) and Yvonne Strahovski (“The Handmaid’s Tale”). That means she’s competing against two of her co-stars, including defending champ Dowd. Anytime three co-stars are nominated against one another, the possibility of splitting the vote is high, especially when there is no clear standout among the three.

Her triumph in guest last year could be a reason for Emmy voters to spread their wings and give the statuette to someone who doesn’t have any Emmy wins under their belt yet for their respective role. Do you think the pros outweigh the cons?