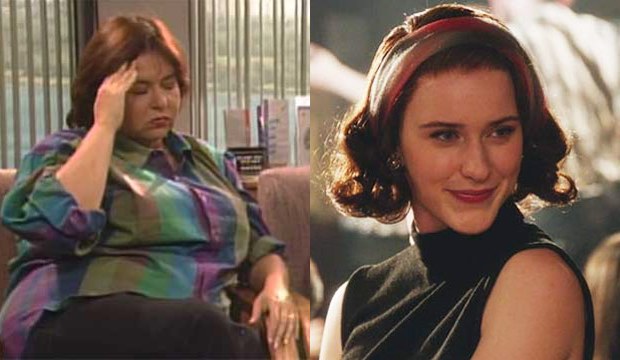 Amy Sherman-Palladino is best known for creating “Gilmore Girls” and her current hit show, Amazon’s “The Marvelous Mrs. Maisel.” But did you know she actually got one of her first big breaks writing during the original run of “Roseanne” for six seasons (1990-1994)? Sherman-Palladino (with Jennifer Heath) earned her first and currently only Emmy nomination in 1992 for Best Comedy Writing for the episode “A Bitter Pill to Swallow.” Coming full circle, Sherman-Palladino 26 years later will now have to compete against the “Roseanne” revival at the 2018 Emmys.

Sherman-Palladino earned the original “Roseanne” its ONLY Best Comedy Writing nomination. “A Bitter Pill to Swallow” deals with Becky (Alicia Goranson) asking Roseanne (Roseanne Barr) to take her to get birth control and her less than excited reaction. It was as funny as it was insightful, giving audiences a glimpse of the lightening quick and hilarious dialogue which would become “Roseanne’s” signature.

The episode faced tough competition that year as it was up against two entries from “Murphy Brown” — “Come Out, Come Out, Where Ever You Are” (Steven Peterman and Gary Dontzig) and “Uh-Oh, Part II” (Diane English and Korby Slamis) — as well as a trio of “Seinfeld” episodes: “The Parking Garage” (Larry David), “The Tape” (David, Bob Shaw and Don McEnery), and eventual winner “The Fix Up” (Larry Charles and Elaine Pope).

Getting another Emmy nomination has not been from lack of effort on Sherman-Palladino’s part as she was the creator and co-showrunner with her husband Daniel Palladino of “Gilmore Girls” for its first six seasons (2000-2006). The writer’s branch, which often goes their own way nominating shows that typically are not award contenders, even ignored her best episode during the original run “Friday Night’s Alright for Fighting.” The second half of the episode takes place solely at one of the Gilmore’s infamous Friday night dinners and Sherman-Palladino gives Aaron Sorkin a word-per-minute run for his money. The revival “A Year in the Life” that debuted to much fanfare last year was once again ignored by the TV academy.

But it will be hard to ignore “Mrs. Maisel” as the “Pilot,” written and directed by Sherman-Palladino, is a knockout of an episode and potential submission and even diehard “Gilmore Girls” fans would have to admit some of her best work to date. Sherman-Palladino has persevered with her new show an instant hit on the streaming service Amazon, winning the Golden Globe for Best TV Comedy/Musical, the PGA Award for Best Comedy Series, and a DGA nomination for Best Comedy Directing for the pilot.

Currently according to Gold Derby’s odds, “Mrs. Maisel” sits securely in second place in the race for Best Comedy Series with odds of 9/2. Those odds could improve as the series could end up being this year’s most nominated comedy. “Roseanne” currently sits in ninth place with odds of 66/1. But even if the revival should continue its mega-hot ratings it could still be viewed as a longshot to crack the series race as it never was able to do so during its original run. And its only nominated writer Sherman-Palladino did not pen any of the episodes for this season. Should Sherman-Palladino triumph it could be a great moment for her as she is likely to look out at the audience filled with people who will know and appreciate how much work it took to win the trophy that alluded her 26 years earlier.