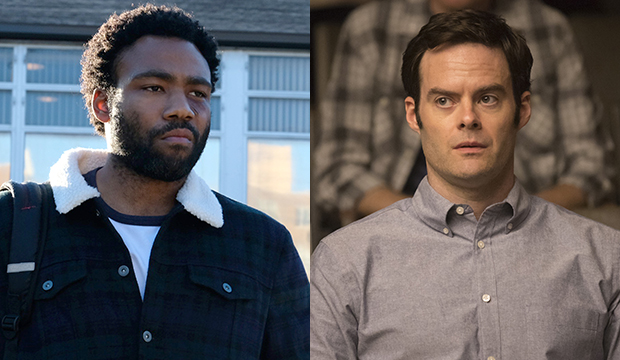 One of the low-key storylines of the Emmys was Donald Glover and Bill Hader‘s quintuple battle for Emmy supremacy. The multi-hyphenate auteurs went head to head in in five categories, and in an upset, it was Hader who emerged on top with one victory between them.

They lost the guest category at the Creative Arts Awards last weekend to Katt Williams (“Atlanta”), who was in sixth place in our combined odds. That was the only win we were forecasting for Hader. Our odds had pegged both of them losing directing (to Hiro Murai for “Teddy Perkins” from “Atlanta”) and writing (to Amy Sherman-Palladino for “The Marvelous Mrs. Maisel”‘ pilot), while “Atlanta” was predicted to win Best Comedy Series and Glover was the favorite to repeat in actor.

As expected, they did lose directing and writing — both to Sherman-Palladino — so both were 0-3, but Glover was still on track to rally in the remaining two categories. Instead, Hader edged him out for Best Comedy Actor, and “Maisel,” buoyed by four victories during the night (Rachel Brosnahan and Alex Borstein won the actresses races), made history as the first streaming show and the second hour-long show, after “Ally McBeal,” to win Best Comedy Series.

So the final tally: Hader, 1; Glover, 0. But the bigger goose egg is the fact that “Atlanta” went home empty-handed completely on Monday, losing supporting bids for Brian Tyree Henry and Zazie Beetz as well. At least it can drown its sorrows with “The Handmaid’s Tale,” which was also shut out.