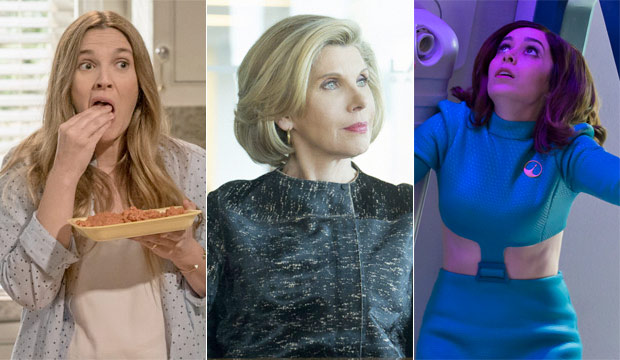 According to Gold Derby’s racetrack odds, three of the best female performances of the 2017-18 TV season are on the bubble to receive Emmy nominations. There’s still a chance that these actresses can beat the odds and walk away with Emmy bids, so here’s my last-minute effort to convince TV academy members to vote for them before nominations voting closes June 25 at 10 p.m. PT. Below I’ve singled out one female longshot from a comedy, one from a drama and one from a movie/limited series. (Also see the three male performers I’m rooting for.) Let me know which bubble contenders YOU hope receive Emmy love down in the comments section.

Drew Barrymore (“Santa Clarita Diet”) – Best Comedy Actress
As zombie mom Sheila Hammond, film star Barrymore is playing the role of a lifetime. Netflix’s dark comedy has the daunting task of asking viewers to empathize with a flesh-eating monster every episode, but Barrymore’s kindhearted performance makes that task appear effortless. Sheila is always a wife and mother first, which grounds the show in a sense of realism while giving Barrymore the chance to shine as an actress. But of course, it’s always fun seeing Barrymore in full zombie-mode, whether she’s feasting on Nazis or talking to decapitated heads or cleaning up bloody crime scenes of her own making.

Christine Baranski (“The Good Fight”) – Best Drama Actress
As savvy attorney Diane Lockhart, Baranski previously earned six supporting Emmy bids for original CBS drama “The Good Wife,” but she was snubbed last year as a lead for Season 1 of the streaming-only spinoff “The Good Fight.” My fingers are crossed that Baranski was overlooked last year because voters simply weren’t aware of CBS All Access, and not that they’ve tired of her decade-long performance. The streaming network recently sent out a tongue-in-cheek FYC mailer for “The Good Fight” teasing “golden shower tapes enclosed,” so hopefully the Diane character has enough left-leaning fans within the TV academy membership who’ll get the joke and honor the politically charged drama.

SEE‘The Good Fight’ Emmy FYC video shines a light on Christine Baranski, who ‘knows how to nail a closeup’ [WATCH]

Cristin Milioti (“USS Callister: Black Mirror”) – Best Movie/Limited Series Actress
In “Black Mirror” Milioti plays the show’s unlikely heroine Nanette Cole, a tech savvy new employee at a video game company who one day wakes up inside of a virtual world as a digital clone. It turns out that her socially awkward co-worker Robert Daly (Jesse Plemons) has created copies of the entire office staff and placed them aboard a “Star Trek”-like spaceship where he’s the captain. While the other virtual copies have accepted their fates, Cole makes it her mission to find a way back to the real world. Milioti rose to fame on television for playing the titular mom in “How I Met Your Mother,” before going on to receive a Critics’ Choice nomination for “Fargo” (2016).