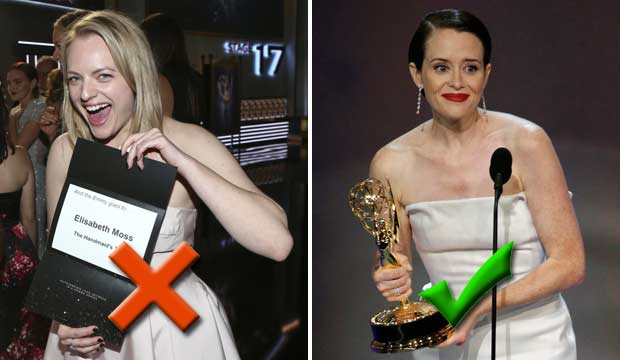 A common refrain here at Gold Derby is that Emmys love reruns. That’s how you get shows like “Modern Family” and “Mad Men” and actors like Jim Parsons (“The Big Bang Theory”) and Julia Louis-Dreyfus (“Veep”) that win over and over (and over and over) again. But in 2018 the television academy bucked that trend by mostly rejecting repeat winners in favor of first-time champs. Is this the end of Emmy rubber-stamping?

In 2015 the television academy expanded voting to the entire television academy as opposed to the small, restricted judging panels that used to pick the winners. Then in 2016 the academy did away with preferential ballots in favor of a plurality vote: instead of ranking the nominees, now voters just pick one winner from the list of nominees. Those changes meant that episode submissions were no longer as influential as they used to be. So were the Emmys destined to become a popularity contest with results more like the SAG Awards, where we often see results like seven straight wins for Alec Baldwin (“30 Rock”)?

Perhaps surprisingly, we haven’t seen voters name-check the same winners by rote, even though that was a distinct possibility with a more monolithic voting body. Sure, there are still actors like Louis-Dreyfus who keep winning: she claimed her first three Emmys for Best Comedy Actress under the old voting system (2012-2014), but she won the next three even as voting was changing (2015-2017). And yes, “Game of Thrones” did win Best Drama Series for the third time this year, but voters could have easily stuck with “The Handmaid’s Tale” after its victory in 2017. So in a way the “Thrones” comeback was a vote against rubber-stamping.

SEEEmmy’s biggest lesson of 2018: Vote-splitting is real, and it’s spectacular

And consider other categories this year where the defending champs seemed like strong contenders to repeat, but didn’t. Best Drama Actor incumbent Sterling K. Brown (“This is Us”) was overtaken by Matthew Rhys (“The Americans”). Best Drama Actress switched from Elisabeth Moss (“The Handmaid’s Tale”) to Claire Foy (“The Crown”). Reigning Best Drama Supporting Actress Ann Dowd (“Handmaid’s Tale”) was overtaken by last year’s also-ran Thandie Newton (“Westworld”). Even the Drama Writing and Drama Directing races had brand new winners (“The Americans” and “The Crown,” respectively).

There was turnover in other races too. Emmy voters could have picked Laura Dern (“The Tale”) for Best Movie/Mini Actress a year after they awarded her Best Movie/Mini Supporting Actress for “Big Little Lies,” but they went with Regina King (“Seven Seconds”) instead. Though I guess you could call that rubber-stamping too since it was King’s third win in four years — without a doubt this new voting system has been especially kind to the veteran actress.

And in one of the most rubber-stamped races at the Emmys, Best Reality-Competition Series where only three shows had ever won in 15 years, “RuPaul’s Drag Race” eked out its first victory against four-time champ “The Voice.”

We might not be entirely through with rubber-stamping at the Emmys — I suspect Louis-Dreyfus and “Game of Thrones” will win again in 2019 — but the last three years of Emmys have put the fear to rest that the new voting system would completely flatten the awards into a marathon of same-old-same-old. Gratifyingly, there’s still room for new blood on TV.