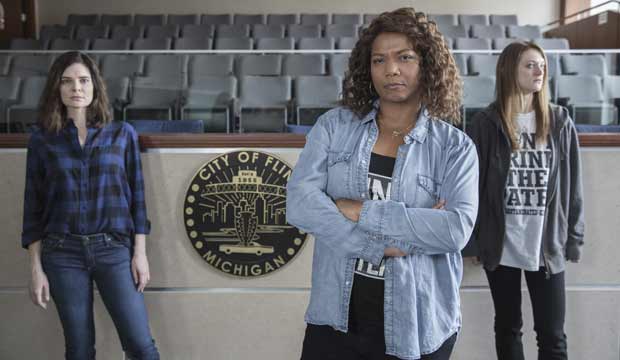 At this year’s Emmys, Lifetime is hoping voters drink up its Best TV Movie contender “Flint,” which chronicles the ongoing water crisis in that poisoned Michigan town. Starring Queen Latifah, who also produced the film, “Flint” tells the story of a local woman named Iza Banks who’s dealing with the town’s lead in the water supply. The Writers Guild Awards already rewarded the project for Barbara Stepansky‘s script based on the Time Magazine cover story “The Poisoning of an American City,” so might the Emmys follow suit?

Awards groups are suckers for these kinds of civilian activist projects, as they usually come from a place of passion and allow the performers to express a whole range of emotion. Think Julia Roberts winning an Oscar for investigating a similar story in “Erin Brockovich” (2000) or Meryl Streep earning a nomination for playing a nuclear safety whistleblower in “Silkwood” (1983).

SEEWill Catherine Zeta-Jones (‘Cocaine Godmother’) add an Emmy to her mantel after victories at Oscars and Tonys?

Television critics found that the made-for-TV movie rose above their expectations. Daniel Fienberg (Hollywood Reporter) wrote, “‘Flint’ is entirely non-exploitative and honorable in its intentions … elevated mostly by a splendid ensemble of actresses.” Mark Perigard (Boston Herald) declared, “‘Flint’ is an admirable salute to the power of grass-roots activism as well as a laudable public service message.” And Sonia Saraiya (Variety) singled out the “fine performances by leads Betsy Brandt, Marin Ireland and Jill Scott.”

Australian director Bruce Beresford helmed the telefilm that aired October 28, 2017 on Lifetime. Will the name recognition of this two-time Oscar nominee for “Tender Mercies” (Best Director, 1983) and “‘Breaker’ Morant” (Best Adapted Screenplay, 1980) bring extra awards buzz to the project? In addition to its WGA victory, “Flint” was also nominated at the Critics’ Choice Awards for Best TV Movie.