“Game of Thrones” has once again taken the Emmys by storm, amassing 22 nominations, making it the most nominated show this year. Three of those nominations come in the acting categories, with Emmy darling Peter Dinklage (Tyrion) nabbing his seventh bid for Best Drama Supporting Actor. His co-star and on-screen brother Nikolaj Coster-Waldau, aka Jaime Lannister, joins him in this category – grabbing his first ever Emmy nomination.

Lena Headey completes the trio of nominated Lannister siblings with her fourth nomination for Best Drama Supporting Actress coming after another masterclass in acting as Cersei Lannister. As great as it would be for all three actors to win, that simply can’t happen – unless, somehow, Dinklage and Coster-Waldau tie for the win in their category. It’s really a chance of getting two awards, one award or zero awards, then.

But what does Emmy history tell us about the trio’s chances? Well, here’s a handy little chart detailing recent pairs of actors and actresses who have been nominated for their supporting roles in the same show, in the same year. If their name is in green, they won the Emmy. If it’s in red, they lost. If the entire row is green, then both the Best Supporting Actor and Best Supporting Actress co-stars won. 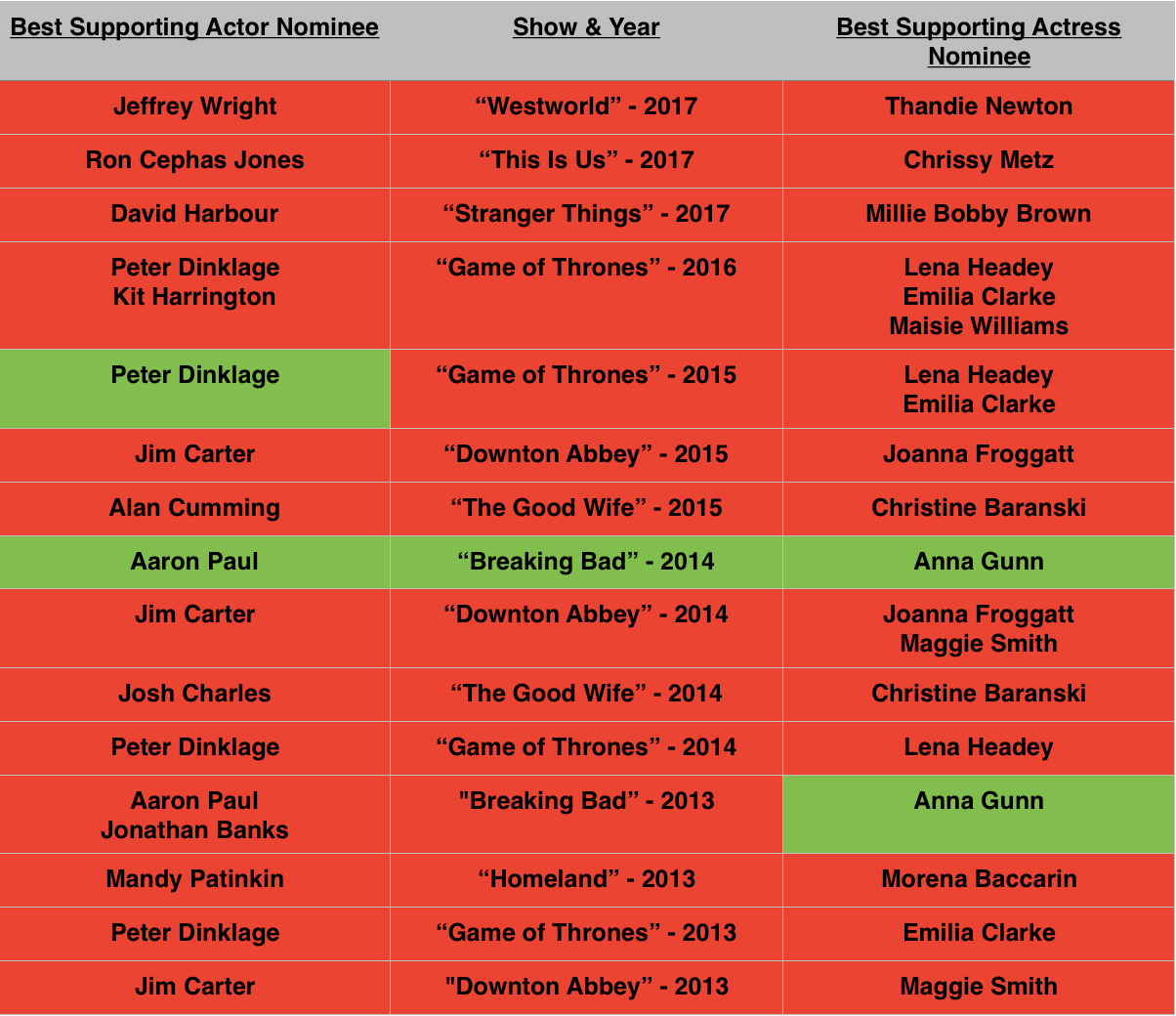 So, when an actor and an actress from the same show are nominated in their respective categories in the same year, neither of them tend to do well and manage to win.

Out of the last 15 pairings of Best Supporting Actor nominees and Best Supporting Actress nominees from the same show, only on three occasions has anyone actually won. Anna Gunn won in 2013 for “Breaking Bad,” while her co-stars Aaron Paul and Jonathan Banks lost to Bobby Cannavale of “Boardwalk Empire.” In 2015, Peter Dinklage won for “Game of Thrones,” but his co-stars Emilia Clarke and Lena Headey both lost to Uzo Aduba from “Orange is the New Black.”

Only one pairing in of the last 15 actually resulted in both the Supporting Actor nominee and the Supporting Actress nominee taking home Emmys. That was in 2014, when “Breaking Bad” co-stars Paul and Gunn prevailed.

History, therefore, doesn’t bode well for “Game of Thrones” co-stars Dinklage, Headey, and Coster-Waldau. If the above pattern is anything to go by, then the Lannister siblings will all, most likely, come away empty-handed. And for a family synonymous with gold, that’s gotta sting a little.