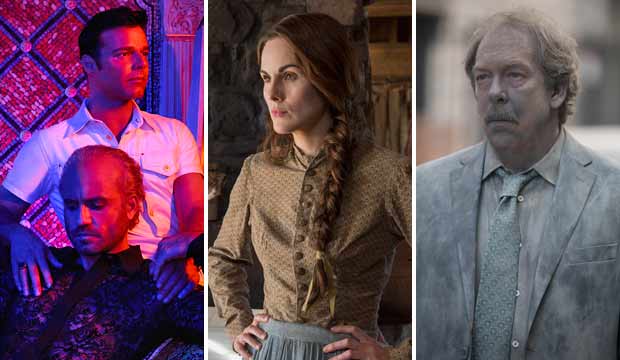 “Big Little Lies” ran away with Best Limited Series and any other Emmys that weren’t nailed down in 2017. But there doesn’t seem to be as decisive a favorite in the 2018 race — at least, not according to our Editors who cover awards year-round for Gold Derby. There are only three programs they all agree will be nominated: “The Assassination of Gianni Versace,” “Godless” and “The Looming Tower.” But they don’t agree on which will win.

As of this writing “Versace” is the front-runner to win with 9/5 odds based on the combined predictions of more than 2,000 Gold Derby users. That includes support from four out of eight Editors: Joyce Eng, Marcus James Dixon, Tom O’Neil and myself. “Versace” is the second season in FX’s true-crime anthology series “American Crime Story” that began in 2016 with “The People v. O.J. Simpson,” which swept the Emmys that year, including Best Limited Series. So the academy has already shown their fondness for the show. It stands to reason voters would rally around producer Ryan Murphy again, right?

Not if up-and-coming streaming services get their way. Netflix’s western “Godless” ranks fourth in our overall predictions with 13/2 odds, but our Editors actually rank it second, with Rob Licuria and Paul Sheehan both predicting that it will upset. Netflix has never received an Emmy nom for Best Limited Series, but there’s a first time for everything, and Netflix has spent years racking up firsts: it was the first streaming service to break through with nominations for Best Drama Series (“House of Cards,” 2013) and Best Comedy Series (“Orange is the New Black,” 2014), and it had the first streaming winner for Best TV Movie (“Black Mirror: San Junipero,” 2017).

But Hulu stole some of Netflix’s thunder in 2017 when its breakthrough series “The Handmaid’s Tale” became the first streaming show to win Best Drama Series. Now they’re hoping to make similar history with their limited series “The Looming Tower,” which ranks third in our overall predictions with 11/2 odds and ranks third with our Editors as well with Chris Beachum and Matt Noble forecasting its victory. “Looming Tower” is based on the Pulitzer Prize-winning nonfiction book about the investigations and miscommunications between the CIA and FBI in the years leading to 9/11.

“Looming Tower” boasts a prestigious cast including Emmy winners Jeff Daniels and Alec Baldwin, Emmy nominee Bill Camp and Golden Globe nominees Peter Sarsgaard and Michael Stuhlbarg. And true stories are often popular with Emmy voters, as evidenced in the last 10 years by “John Adams” (2008), “The Pacific” (2010), “Game Change” (2002), “Behind the Candelabra” (2013) and the aforementioned “People v. O.J.” That could help “Versace” too, of course. So do you agree with our Editors that this is a three-way race?