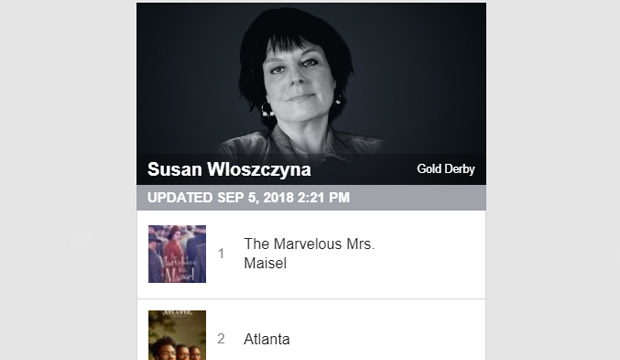 I don’t mean to humble brag or even full-on brag. But even though I am the new Gold Derby editor on the block, I scored the best percentage of correct picks among my colleagues. I also tied with three other Experts – Chris Harnick of E!, Kelly Lawler of my former alma mater USA TODAY and Lynette Rice of Entertainment Weekly, all who cover TV for a living.

You can see the final leaderboard displaying the scores of our Experts here. Click on my name to see my right/wrong predictions.

But here is the thing: I am no TV expert.  I am far more movie-motivated and Oscar-crazed. Sure, I have watched more than my share of “Chopped,” continue to indulge in “Survivor” and “The Amazing Race” and am addicted to CBS’ “The Good Fight.”  OK, I scored 61.54 percent correct, which would barely translate into a passing grade on anything.

SEEEmmys 2018 winners: Best prediction scores by our Editors and Users

However, I have a theory that I want to share with you. The more you know about the award in question and the nominees, the more you will second-guess yourself to death and ruin your chances. Back when “Three Billboards Outside Ebbing, Missouri” was facing off with “The Shape of Water,” I had Guillermo del Toro’s  triumphant Cold War fish-man tale at No. 1 for the longest time. That is until I had a hot flash or something , and switched to “Three Billboards.” I also waffled between that  “Coco” song, “Remember Me,” and “This Is Me” from The Greatest Showman” so much, all I could hear was me-me-me.  I can’t even remember which I picked.

Therefore, when our fearless leader Tom O’Neil told me I had Expert status when it came to Emmy picks, who was I to argue? I immediately placed “The Marvelous Mrs. Maisel” No. 1 in every category it was competing in. As someone who binge-watched all seven seasons of “Gilmore Girls” over two-and-a-half weeks until I couldn’t stand Carole King’s “I Will Follow” anymore, I practically contracted a case of the “Maisels” gobbling up each episode. And knowing that “The Americans” was coming to a close, I just figured Matthew Rhys.

After I made my initial picks, I decided to basically keep my initial gut feelings intact. Again, I did not know enough to have many second  hunches. Besides,  I wanted to know if my idiot savant theory panned out. And, lo and behold, it sort of did.

I don’t know if I can hold to such know-nothing standards once the Oscar race truly gets going once all the potential candidates are seen. But just as emotions should be set aside while participating in Derby-ing, so, too, should overthinking. All I know for now is one of those songs that are still playing in my head from “A Star Is Born” will definitely win.