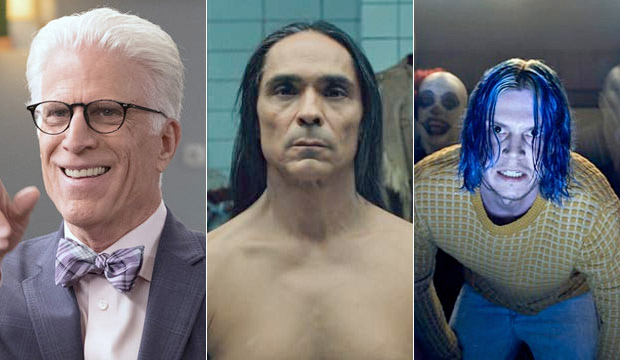 Three of the best male performances of the year are on the bubble for Emmy nominations, based on Gold Derby’s racetrack odds. There’s still a chance that these actors can beat the odds and walk away with Emmy bids, so here’s my last-ditch effort to convince TV academy members to vote for them before nominations voting closes June 25 at 10 p.m. PT. Below I’ve singled out one male underdog from a comedy, one from a drama and one from a movie/limited series. (Also see the three female performers I’m hoping for.) Let me know which bubble contenders YOU hope receive Emmy love down in the comments section.

Ted Danson (“The Good Place”) – Best Comedy Actor
Danson is no stranger to the Emmy Awards, receiving 11 nominations in this category alone for “Cheers” and winning twice in 1990 and 1993. However, a nomination for his role as Michael, a demonic architect in the afterlife, would really be a nomination for the whole show. “The Good Place” is the nichest of niche comedies, a truly original, cerebral series that has an extremely passionate — albeit small — fan base. Danson’s victory earlier this year at the Critics’ Choice Awards (co-star Kristen Bell was also nominated) proves that TV critics are on board the “Good Place” trolley, but are Emmy voters? We’ll find out when the noms are announced July 12.

SEEEmmys 2018: Will Ted Danson (‘The Good Place’) set a new record for the most Best Comedy Actor nominations ever?

Zahn McClarnon (“Westworld”) – Best Drama Supporting Actor
Not since the “Lost” episode “The Constant” has an episode of television touched fans with its romanticism while simultaneously feeding our hunger for answers, all through the eyes of relatively new character. But that’s exactly what “Westworld’s” “Katsuya” did. McClarnon’s Ghost Nation character Akechata was revealed in essence to be the Desmond of “Westworld,” someone who’s always been there in the background and whose actions led to answering some of the show’s biggest mysteries. Akechata’s quest to be reunited with his wife from a previous storyline finally paid off in Sunday’s season finale, but is this really the last we’ve seen of the former “Fargo” star on “Westworld”?

Evan Peters (“American Horror Story: Cult”) – Best Movie/Limited Series Actor
Emmy voters often take for granted performances by younger actor, so if Peters ends up being snubbed that’s the excuse I’ll tell myself. But let’s face it, the 31-year-old actor gave the performance of his career in “AHS” Season 7 as blue-haired cult leader Kai Anderson. His terrifying and heavily researched performance earned raves from critics and even netted him his first Critics’ Choice nomination. Adding to the challenge, Peters was asked by showrunner Ryan Murphy to portray such notable figures as Charles Manson, Marshall Applewhite, David Koresh, Jim Jones, Jesus and Andy Warhol during “AHS: Cult.” Hmm, does that mean Peters should get seven Emmy nominations?