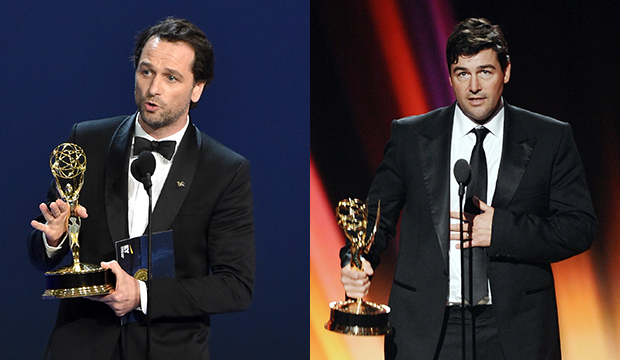 For a while, many were hoping and/or predicting “The Americans” would pull a “Friday Night Lights” at the Emmys: win Best Drama Writing for its series finale and Best Drama Actor in its final go-around just like “FNL” did in 2011. It came true Monday night, when “START,” written by Joel Fields and Joe Weisberg, won the former and Matthew Rhys took home the latter. That one-two punch, however, isn’t the only way their final Emmy runs were eerily alike.

The critically adored, criminally under-rewarded shows were up for the same four awards in their final seasons: Best Drama Series, Best Drama Actor (Rhys, Kyle Chandler), Best Drama Actress (Keri Russell, Connie Britton) and Best Drama Writing (“Always” by “FNL” executive producer Jason Katims). That’s not breaking news, and yeah, they lost the same awards, which quite a few people predicted as well. But to whom they lost those prizes is notable.

“The Americans” lost Best Drama Series to “Game of Thrones,” while “FNL” fell to “Mad Men.” Both those champs were Emmy darlings that an underdog like “The Americans” and “FNL” didn’t have enough backing to overcome. And both “Game of Thrones” and “Mad Men” were on win streaks relative to their eligibility as well; the former won in 2015 and 2016 before sitting out the 2017 cycle, while the latter won its fourth straight and final Best Drama Series Emmy in 2011. If “Game of Thrones” wins again next year for its final season, then “The Americans” and “FNL” would’ve both lost to four-time winners (“Hill Street Blues,” “L.A. Law” and “The West Wing” also have a record four wins in the category).

Plus, “The Americans” and “FNL” have lost to two shows that, despite their sprawling casts, have (so far) only seen one of their respective actors win an Emmy: Peter Dinklage, who bagged his record-tying third Best Drama Supporting Actor Emmy Monday, and Jon Hamm, who won for “Mad Men”‘s final season in 2015. (Lest we forget, Chandler upset Hamm, who had “The Suitcase” that year).

Meanwhile, Russell and Britton were victims of the Make-Up Win. Russell lost to Claire Foy (“The Crown”) and Britton was beaten by Julianna Margulies (“The Good Wife”). Foy and Margulies prevailed for their second seasons, a year after they were seemingly unbeatable for their freshman outings. They had both nabbed the Golden Globe and Screen Actors Guild Awards for their first seasons and appeared on track to sweep the Emmy as well, but Foy’s momentum was derailed by Elisabeth Moss, who was overdue for an Emmy herself (seven losses) and whose show, “The Handmaid’s Tale,” surprised us all with eight victories last year. Margulies’ Season 1 loss for “The Good Wife” was due to a combination of a suboptimal submission (she went with “Threesome” instead of the pilot) and eventual champ Kyra Sedgwick‘s great submission (“Maternal Instincts” from “The Closer”) and overdue factor (Sedgwick was on her fifth straight nomination).

Margulies’ 2011 win was expected, but Moss was predicted to defend her crown (no pun intended) on Monday; however, this was not the first time Moss has lost to Foy this year: Foy defeated her at the SAGs in January, albeit for different seasons of “The Handmaid’s Tale.” That was Foy’s second consecutive SAG win. You know who else won back-to-back SAGs for her first two seasons before winning an Emmy? Yup, Margulies. Foy’s Emmy triumph also means that all multiple SAG Best Drama Actress winners, which includes Gillian Anderson (“The X-Files”), Edie Falco (“The Sopranos”), Allison Janney (“The West Wing”) and Viola Davis (“How to Get Away with Murder”), have won a corresponding Emmy. And since this was Foy’s last season on “The Crown,” it was do or die.

Yes, it was do or die for Russell and Britton and their shows too, but let’s just be glad that “The Americans” and “FNL” managed to walk away with some major Emmy hardware in their last hurrahs. And maybe seven years from now we’ll be saying some show is pulling an “Americans.”