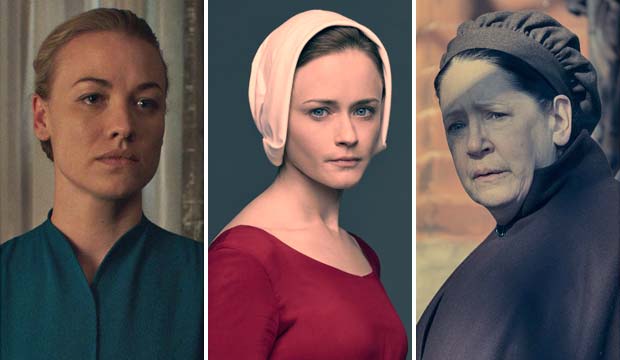 Vote-splitting is back, and never underestimate it again! That’s the lesson I learned watching a lot of my Emmy predictions go down in flames on Monday night, September 17. I thought we were making too much of the phenomenon since there were seven winners at the 2017 telecast who won despite being up against another nominee from their show, but it reared its ugly head again in 2018. Peter Dinklage (Best Drama Supporting Actor for “Game of Thrones“) was the only person who won against a co-star (he was up against on-screen brother Nikolaj Coster-Waldau).

This phenomenon didn’t always exist. In fact, it was quite the opposite. Being nominated against you co-star used to be an advantage, especially in an acting race judged by episode submissions where voters would see one actor in multiple reels. But even without episode submissions it was an advantage on a preferential ballot where fans of, say, “The Handmaid’s Tale” could vote for three nominees from the show in first, second and third position, making it likely that one of them would win when final scores are calculated.

Now the Emmys are decided by a simple plurality vote, where you just pick one winner instead of ranking them. Now three “Handmaid’s” nominees need to worry that the support between them will be divided so evenly that another nominee could sneak up from behind them and snatch the prize instead. And that’s exactly what happened on Emmy night, including a number of tight races and a few upsets too. Consider these outcomes the next time you, like me, are thinking vote-splitting might not make much of a difference after all:

“This is Us” co-stars Sterling K. Brown and Milo Ventimiglia and “Westworld” co-stars Jeffrey Wright and Ed Harris lost Best Drama Actor to Matthew Rhys (“The Americans”) even though Brown was the defending champion in the category

“Game of Thrones” (for the episodes “Beyond the Wall” and “The Dragon and the Wolf”) lost Best Drama Directing to “The Crown” (for “Paterfamilias”) even though “Thrones” had won that award the last two times it was nominated (2015-2016).

“Atlanta” (for “FUBU” and “Teddy Perkins”) lost Best Comedy Directing to “The Marvelous Mrs. Maisel” (for the pilot) even though “Atlanta” was the defending champion in the category.

“Atlanta” (for “Alligator Man” and “Barbershop”) and “Barry” (for “Chapter One” and “Chapter Seven”) lost Best Comedy Writing to “The Marvelous Mrs. Maisel” (for the pilot)

SEEPsst! Here are 7 secrets you didn’t know about the 70th Emmy Awards that I only learned by being there

Vote-splitting won’t always cost you an Emmy. Just look at the Creative Arts Awards, where Tiffany Haddish (“SNL”), Samira Wiley (“Handmaid’s Tale”) and Ron Cephas Jones (“This is Us”) all won prizes for guest-acting against fellow nominees for their respective shows. And last year it wasn’t a problem for the aforementioned Brown, McKinnon, Dowd. But we’ve now seen too many examples of the phenomenon to deny its impact. The current Emmy voting system is still so new (just three years old in its current form) that I’ve considered the last few years to be a fact-finding mission. Consider this fact found.