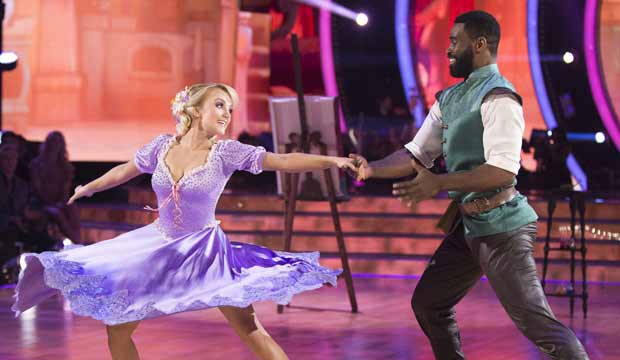 It has been a tough season for female celebs on “Dancing with the Stars,” but our users who have been predicting the show every week are holding out hope for at least one woman. More than hope, actually — they think she could even win. “Harry Potter” star Evanna Lynch has skyrocketed in our Mirror Ball Trophy predictions, challenging previous front-runners Milo Manheim and Juan Pablo Di Pace.

As of this writing Lynch is actually the favorite to win the Mirror Ball with leading odds of 9/2, followed by Manheim and Di Pace at 5/1, though it’s so close that they’re virtually tied for first place on our racetrack. That’s surprising given what happened on Disney Night. Di Pace got a nearly perfect score and topped the leaderboard with a “Beauty and the Beast”-inspired Viennese waltz, while Manheim was close behind with his “Incredible” quickstep. Lynch landed in sixth place with a total of 24 out of 30, tied with John Schneider and ahead of only Bobby Bones and Joe Amabile.

So why do our users think she’s a threat to win all of a sudden? Well, you could look back at the first week of the competition, when Lynch was one of the six lowest scorers, but wasn’t one of the bottom six contestants when judges’ scores were combined with viewer votes. She was the only woman who wasn’t in the bottom six besides Tinashe, who had a huge buffer on the judges’ leaderboard. That means Lynch has the support of a strong fan base, possibly more than any other female celeb.

Since then her scores have improved, peaking on Most Memorable Year Night when she received straight 9s for a total of 27 out of 30. She dipped back down again on Trios Night and Disney Night, but if she indeed has more fan support than her fellow ladies Alexis Ren and Mary Lou Retton, that could keep her afloat long enough to get her scores back up, which she is more than capable of doing — to be honest, I think the judges have been low-balling her all season, so she’s due for some higher numbers.

Do you agree with our odds that Lynch is one of the top three contenders along with Manheim and Di Pace? Or will that old black magic wear off?