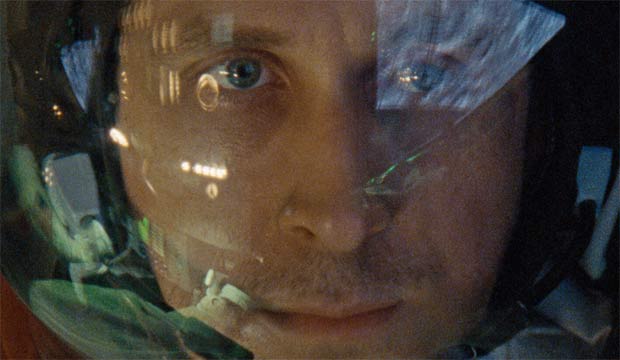 “First Man” opened on October 12, and critics are over the moon — pardon the pun, I couldn’t resist. In director Damien Chazelle‘s first film since becoming the youngest Best Director winner in Oscar history for “La La Land” (2016), “First Man” explores the historic career of astronaut Neil Armstrong, who as the title indicates was the first man ever to walk on the moon.

As of this writing the film has a MetaCritic score of 85 based on 52 reviews, and on Rotten Tomatoes it’s 90% fresh based on 199 reviews. The Tomatometer critics consensus says the film “uses a personal focus to fuel a look back at a pivotal moment in human history — and takes audiences on a soaring dramatic journey along the way.”

Ryan Gosling plays the title role, and his performance has been called a “career-best.” He “excels at minimalist, emotional performances.” Meanwhile, the filmmaking is “a giant leap” for Chazelle, who delivers a “technically astonishing” drama that is also “an intimate character study.” It’s a “worthy successor” to “Apollo 13” and “The Right Stuff.”

Gosling has been nominated twice for Best Actor at the Oscars: for “Half Nelson” (2006) and then for teaming up with Chazelle on “La La Land.” He has yet to win, but as every Oscar watcher knows biopics are big business for actors seeking an awards windfall. Five of the last six Best Actor winners played real people, including the reigning champ, Gary Oldman, who portrayed Winston Churchill in “Darkest Hour.”

Will Gosling finally win? And could Chazelle be redeemed in the Best Picture race after “La La Land” was famously upset by “Moonlight” amid a shocking envelope mix-up? Check out some of the reviews below, and join the discussion on this and more with your fellow movie fans in our forums.

Jocelyn Noveck (Associated Press): “An intimate character study that somehow becomes grand just when it needs to, ‘First Man,’ based on the book by James R. Hansen with a script by Josh Singer, is a worthy successor not only to Chazelle’s ‘Whiplash’ and ‘La La Land,’ but to the astronaut films that precede it, like ‘Apollo 13’ and especially ‘The Right Stuff.'”

SEEDamien Chazelle on directing ‘First Man’: ‘The moonwalk is only eight minutes; this is about the eight years that led up to it’

Rafael Motamayor Aguiton (IGN): “The stoic, reserved nature of the character makes this a perfect role for Ryan Gosling, who excels at minimalist, emotional performances … ‘First Man’ is a stunning cinematic achievement that celebrates one of humanity’s biggest triumphs (and mourns the tragedies that happened leading up to it), yet it never loses sight of its personal and small-scale story about a man going to work.”

Stephanie Zacharek (Time): “Its star, Ryan Gosling, turns in a discreet, sensitive performance, almost too sensitive for the movie around it: Minute after minute, Chazelle and cinematographer Linus Sandgren are right there with the (often) handheld camera, coming in tight for allegedly meaningful closeups.”