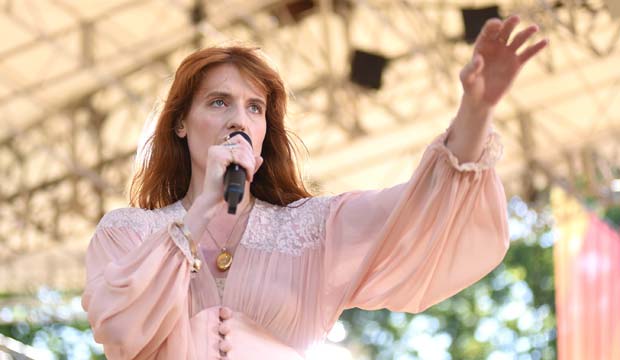 The English rock band Florence and the Machine has returned with their fourth studio album, “High as Hope,” which was released on June 29. What do the critics have to say about by the latest from the group led by the full-throated Florence Welch? And will it win them their first Grammy?

Many reviewers are truly high on “Hope,” describing it as “the realization of a singular talent” and “the most rewarding” album yet from the band thanks to Welch’s “magnificent emoting” and “intimate lyrics.” But a few other critics are more ambivalent, saying that “transcendent moments are “few and far between” and that Welch should tone down the “grandiosity” of her signature style and “sweat the small stuff more often.”

But the response has been more positive than not, so could this finally be their ticket to the Grammy stage? Florence and the Machine have been nominated seven times before but have yet to win. They broke out in 2011 with a nom for Best New Artist. Then in 2013 they returned with a pair of bids: Best Pop Album (“Ceremonials”) and Best Pop/Duo Group Performance (“Shake it Out”).

In 2016 they scored their biggest haul with four nominations: Best Pop Album (“How Big, How Blue, How Beautiful”), Best Pop Duo/Group Performance (“Ship to Wreck”), and Best Rock Performance and Best Rock Song (“What Kind of Man”). In-between Welch earned a nomination for Best Dance Recording in 2014 for “Sweet Nothing,” her collaboration with EDM artist Calvin Harris.

Do they finally deserve their turn in the winner’s circle after almost 10 years? Check out some of the reviews below, and discuss this and more with your fellow music fans here in our forums.

Neil McCormick (The Telegraph): “Florence Welch’s wonderful fourth album marks the realization of a singular talent … Now, at 31, with her most intimate and revealing set of songs, Welch has refined a sound so uniquely her own it really couldn’t be mistaken for the work of any other artist.”

Josh Goller (Slant): “‘High As Hope’ does make room for more nuanced meditations on resiliency, as on ‘Hunger’ when she describes seeing the kind of beauty that, for a moment, makes her ‘forget to worry.’ But these transcendent moments, which explore the evolution of Welch’s personal mythos, are too few and far between.”

Alexis Petridis (The Guardian): “These songs are allowed significantly more room to breathe than those on her previous albums … It gives the distinct impression that there is a different artist somewhere within Florence Welch, struggling against the desire for grandiosity and the kind of big musical statements that have powered her career. ‘High as Hope’ suggests she should sweat the small stuff more often.”