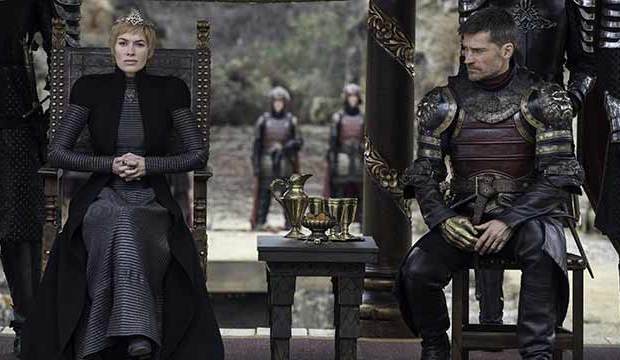 Over the course of seven seasons,  there have been many great episodes in “Game of Thrones.” How can we possibly choose? Well, the finale of the latest season has certainly tried to force our hand a bit, considering the all-round excellence of its contents and how well it did at the 2018 Emmys.

“Game of Thrones” won nine Emmy Awards, making it the biggest winner at TV’s top honors and “The Dragon and the Wolf” figured in many of those, including wins for makeup and music. It was submitted by both supporting actor winner Peter Dinklage and supporting actress nominee Lena Headey. David Benioff and D.B. Weiss reaped a writing bid for this episode as as did director Jeremy Podeswa.

The dialogue was tense and razor-sharp. It had great characters facing off against one another in intense scenes, such as Tyrion’s reunion with Cersei or Jaime’s argument with, er, Cersei. It had great acting from the entire cast, led soundly by the Lannister trio of Peter Dinklage’s Tyrion, Nikolaj Coster-Waldau’s Jaime and Lena Headey’s Cersei. Cersei, yet again, being one of the high points of the show – Headey really is excellent, isn’t she?

And it had the shocks and deaths that have been an iconic staple of the fantasy show since poor old Ned Stark’s head was lopped off his shoulders back in the penultimate episode of season one. Petyr Baelish, may he rest in peace, finally met the end his snakey, conniving behaviour had promised him in one of the show’s standout scenes – Sophie Turner (Sansa), Maisie Williams (Arya) and Aidan Gillen (Baelish) all performed brilliantly. And the familial revelation of Jon and Dany, though already worked out by us die-hard GoT fans, was classic “Thrones.” But, still, is it the best episode ever?

Well, not according to IMDB. It’s listed as the 14th highest rated episode of the show, at 9.6. That’s not bad considering there are 67 episodes in all, but there are four episodes with a rating of 9.9. “Battle of the Bastards” is top of the list – with the penultimate episode of season six being loved so much thanks to its brilliant battle sequence, Jon’s fight during said battle and Ramsay’s downfall (yay!). Episode nine of the season prior to that, “Hardhome” is second on IMDB’s list, with Jon again being the centerpiece after a chilling battle with the white walkers and the wights.

The fourth and final episode with a rating of 9.9 is “The Winds of Winter,” the season six finale. I’ll try to resist the ‘explosive’ puns here. The High Priest’s long-awaited demise was brilliant to see (the most satisfying death on the show? Discuss!), although the death of Margaery, Loras, and Tommen less so. It’s tantalizing ending, too, seeing Jon crowned King in the North and Dany set sail for Westeros, was the perfect end we’d all been waiting for.

All four of those episodes are all rated higher than “The Dragon and the Wolf” – but what do you think? Does “The Dragon and the Wolf” still trump them? Or does one of the four 9.9 rated episodes do it for you? Or perhaps another episode holds a special place in your now broken heart after watching so many of your beloved characters meet a sticky end? Have your say below!