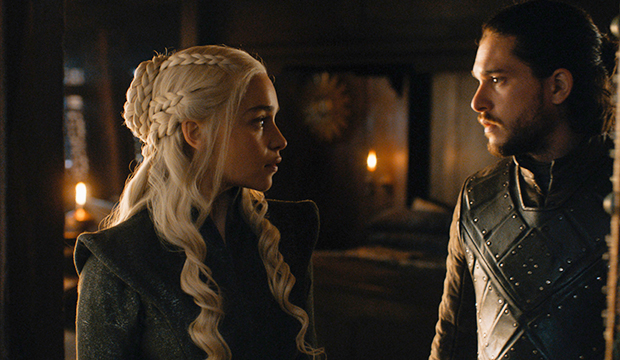 “Game of Thrones” stars Emilia Clarke and Kit Harington both have Emmy nominations under their belts, but there is no guarantee either of them will make the cut this year. The former supporting nominees are rolling the dice in lead for the first time after a seventh season that focused primarily on their — unbeknownst to them, related — characters, Daenerys Targaryen and Jon Snow, respectively. Unfortunately, they find themselves in two very competitive categories and are both on the outside looking in right now, in seventh place, in our odds. If only one of them could get in, who would it be?

A three-time nominee, Clarke is looking to follow the path of Allison Janney, who successfully upgraded from drama supporting to lead for “The West Wing.” The difference, though, is Janney won in each category — twice to boot. The good news for the Mother of Dragons is she doesn’t have to deal with her co-stars Lena Headey and Maisie Williams, against whom she was nominated last in 2016.

But Best Drama Actress is incredibly stacked. Reigning champ Elisabeth Moss (“The Handmaid’s Tale”) and 2017 nominees Claire Foy (“The Crown”), Keri Russell (“The Americans”) and Evan Rachel Wood (“Westworld”) are all forecasted to return. Meanwhile, Mandy Moore (“This Is Us”) is seeking her first career nomination after a stellar season on a show that we know actors love — it got seven acting nominations and two wins last year. And you cannot discount Laura Linney, who got a SAG nomination for “Ozark” and has a 4-1 record at the Emmys. That’s just the top six — you’ve got former champs Viola Davis (“How to Get Away with Murder”), Tatiana Maslany (“Orphan Black”) and Claire Danes (“Homeland”), and past nominees like Sandra Oh (“Killing Eve) and Maggie Gyllenhaal (“The Deuce”) in the running too.

The Best Drama Actor bench is not as deep, but it’s still a tough field. You can book return trips for defending champ Sterling K. Brown and his “This Is Us” dad Milo Ventimiglia and likely for former nominees Matthew Rhys (“The Americans”) and Liev Schreiber (“Ray Donovan”). The two predicted new faces are Freddie Highmore (“The Good Doctor”) and Jason Bateman (“Ozark”), who bagged Golden Globe and SAG nominations but could be derailed by that infamous “New York Times” interview in which he defended Jeffrey Tambor’s verbal harassment of Jessica Walter on the “Arrested Development” set. There are also 2016 champ Rami Malek (“Mr. Robot”), and newbies J.K. Simmons (“Counterpart”), Jonathan Groff (“Mindhunter”) and Donald Sutherland (“Trust”) in contention.

Harington, who only has one previous nomination, also isn’t the only one looking for a category promotion. “Westworld” stars Jeffrey Wright and Ed Harris are moving to lead as well. Ironically, their defections are making it easier for Harington’s co-star Nikolaj Coster-Waldau, who has never been nominated, get into supporting.

Clarke and Harington went lead for the Globes as well, but came up blank there. That’s not surprising since the Globes hate “Game of Thrones” and it’s old. What should concern them, though, is the fact that of the show’s record 38 Emmys, only two of them have been for acting, and both were for Peter Dinklage — in supporting.