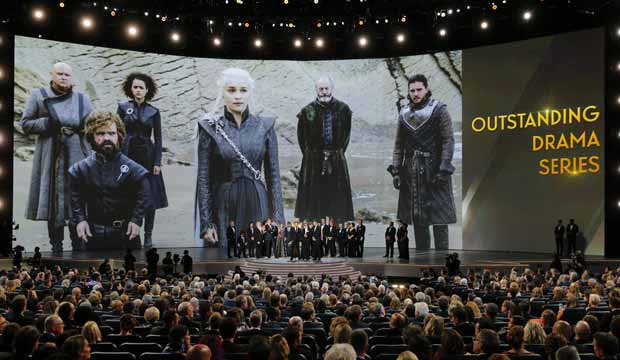 At the Primetime Emmys telecast on September 17 we weren’t expecting “Game of Thrones” to win any of its five categories, but it surprised us twice, and they were pretty big surprises: it claimed Best Drama Series for the third time and also Best Drama Supporting Actor for Peter Dinklage for the third time. That brings the show’s total awards for the year to 9 and its all-time total to 47, which is by far the most awards for a primetime drama or comedy in a single year.

It’s hard to imagine a behemoth like “Game of Thrones” being considered an underdog anywhere, especially at the Emmys where it earned the most nominations of any program this year (22), but most of our users thought last year’s winner, “The Handmaid’s Tale,” would carry its momentum for another year. However, “Handmaid’s” ended up shut out entirely at the telecast, going zero-for-six while the drama races were divided between “Thrones,” “The Americans” (Best Drama Actor and Best Drama Writing), “The Crown” (Best Drama Actress and Best Drama Directing) and “Westworld” (Best Drama Supporting Actress).

The Drama Series win for “Thrones” was historic. With three victories in the top race it is now the most awarded HBO drama in that top category, breaking its tie with two-time winner “The Sopranos.” And if it could win this year with such stiff competition, it might already have the advantage heading into 2019, when it will be competing for its eighth and final season. A fourth victory would tie the all-time record currently held by four-time winners “Hill Street Blues,” “L.A. Law,” “The West Wing” and “Mad Men.”

Dinklage made history too. With his third victory he tied Aaron Paul (“Breaking Bad”) as the most awarded actor in the history of Best Drama Supporting Actor. Oddly, though, while Emmy voters love Dinklage, they don’t seem to even like any of his co-stars. After seven seasons Dinklage’s three wins are the only three acting awards “Thrones” has ever won.

What did you think of the “Thrones” victory? And is it already a shoo-in to win for its final season? Check out the full list of “Thrones” Emmy wins below.

Best Music Composition (Series)
“The Dragon and the Wolf” (2018)