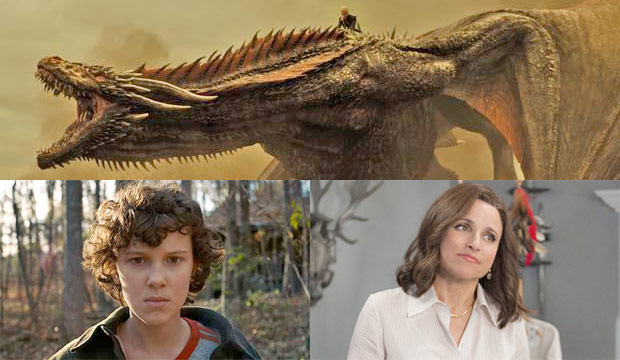 When the Golden Globes nominations are announced Thursday, December 6, several high-profile TV shows won’t be among the crop of contenders, including “Game of Thrones,” “Stranger Things” and “Veep.” But don’t call them snubs. Because the Hollywood Foreign Press Association’s eligibility period is the 2018 calendar year, that means shows that haven’t aired in over a year will be sitting out this year’s Golden Globes. However, you can rest easy knowing they’re all set to return to the airwaves in 2019.

HBO’s record-setting Emmy winner “Game of Thrones” has never been as beloved at the Globes as it has with the TV academy. In fact, Peter Dinklage‘s Globe victory in 2012 as Best TV Supporting Actor is the one and only trophy for the popular fantasy epic. It lost its five Best Drama Series Globe races to “Homeland” (2011), “The Affair” (2014), “Mr. Robot” (2015), “The Crown” (2016) and “The Handmaid’s Tale” (2017). Might HFPA members decide to finally reward the show the following year, as it’s set to air its final episodes in the spring?

Netflix “Stranger Things” was nominated at the Golden Globes for Best Drama Series for its first two seasons, with Winona Ryder earning a Best TV Drama Actress bid for Season 1 and David Harbour sneaking into Best TV Supporting Actor for Season 2. Amazingly, breakout star Millie Bobby Brown has yet to score a Golden Globe nom despite her back-to-back notices at the Emmys. The third season of the retro sci-fi show is expected to debut next summer.

“Veep” has had a unique awards trajectory, winning six Emmys for lead actress Julia Louis-Dreyfus and three for Best Comedy Series while never taking home a single Golden Globe. The savvy political comedy, which has only been nominated seven times at the Globes over the years, will have its last shot at next year’s 2020 ceremony. Perhaps it’ll end up following in the footsteps of “Breaking Bad,” which was skunked at the Globes every year until its final season?

SEEWill Sterling K. Brown (‘This Is Us’) win back-to-back Golden Globes, or is this finally Milo Ventimiglia’s year?

Other than “Game of Thrones,” “Stranger Things” and “Veep,” several other TV programs aren’t eligible for the impending Golden Globes as they didn’t air in 2018, including “The Crown,” “Mr. Robot,” “Veep,” “Curb Your Enthusiasm,” “Better Things,” “SMILF,” “Master of None” and “Transparent.” Also don’t expect to see reigning Emmy winners like “Black Mirror” and “Godless” to earn Golden Globe bids as they were eligible at last year’s ceremony.

According to our Golden Globe predictions, the new dramas most likely to take advantage of all of these open slots are “Killing Eve,” “Homecoming,” “Pose,” “Haunting of Hill House,” “Yellowstone” and “Counterpart.” And the freshman comedies looking to break through are “Barry,” “Forever,” “Kidding,” “The Kominsky Method,” “Camping” and “Who Is America.”