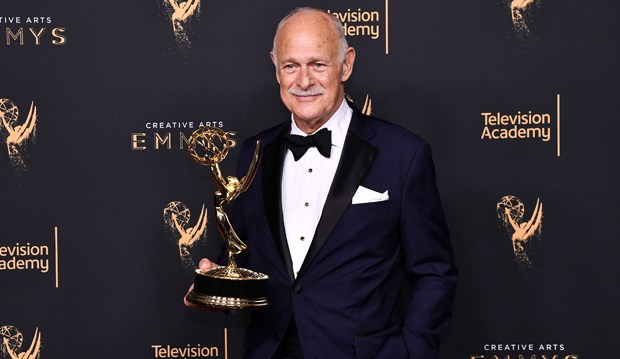 After winning an Emmy last year for playing the inspirational Dr. Nathan Katowski on “This is Us,” guest star Gerald McRaney made his triumphant return to the NBC family drama in Tuesday’s episode, titled “The Car.” McRaney must have squirted lemon juice in our eyes because we were all crying by the end of his five-minute appearance. Will McRaney go on to win a second Emmy Award for this role?

Though Dr. K’s appearance was brief, the emotional impact of the scene should help McRaney stick in Emmy voters’ minds. Shortly after the death of Milo Ventimiglia‘s Jack, Dr. K bumps into Mandy Moore‘s Rebecca at the cemetery. As she wonders whether she’ll be able to continue running the family without her loving husband, Dr. K gives Rebecca her own “lemons” speech, a wink to the pilot episode in which he consoled a heartbroken Jack after he lost a child.

“You didn’t just make something resembling lemonade, dear,” Dr. K told a weepy Rebecca while sitting next to her after the funeral. “You made one of the sweetest damn pitchers of lemonade I ever saw. So don’t you try and sell me on what you can’t do, because I’m too old, I’m too smart and I’m not buying it.”

SEE Readers demand Emmy justice for Mandy Moore (‘This Is Us’) after Super Bowl episode: ‘She is simply stunning’

“This Is Us” earned seven acting Emmy nominations last year and won two for McRaney and Sterling K. Brown. While Moore was snubbed, she has a great shot at rebounding this year as the Pearson matriarch has been put through the ringer emotionally. In fact, our readers are even demanding Emmy justice for Moore.

Last month the entire “This Is Us” cast scored a major victory at the SAG Awards, winning the ensemble prize against such heavy-hitters as “The Crown,” “Game of Thrones,” “The Handmaid’s Tale” and “Stranger Things.” Might this industry acclaim help give the show an Emmy boost in 2018?